SES spreads wings to 355MN global homes | Satellite | News | Rapid TV News
By continuing to use this site you consent to the use of cookies on your device as described in our privacy policy unless you have disabled them. You can change your cookie settings at any time but parts of our site will not function correctly without them. [Close]

It may, like its rivals in the satellite TV arena, have hit headwinds over the last twelve months but operator SES expanded business in 2018 to deliver video to 355 million homes, up four million in a year. 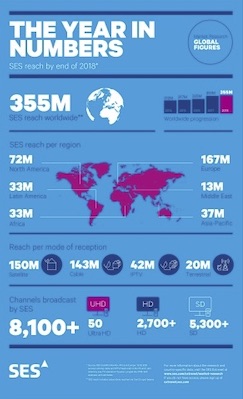 This is according to results from SES’s annual market research which the company said highlighted further growth in the company’s technical reach and underlined the important role of satellite in delivering video to large audiences directly and indirectly in a reliable and cost-effective manner.

The research shows that the SES reach now has spread to a global audience of over a billion people. It is now delivering nearly 2,800 HDTV channels and over 40 commercial Ultra HD TV channels. The latter it says is more than any other satellite service provider.

The SES fleet is also delivering video content to 72 million households across North America, mainly via US cable neighbourhoods. Across other markets, SES has a technical reach of 102.6 million TV homes in key video neighbourhoods serving Asia-Pacific, Latin America and Africa.

In terms of regions, the company reported an increase in technical reach in Europe, Latin America, Asia-Pacific, and Africa. In Africa, this included the addition of Kenya to the survey where more than two million TV homes across the country rely on SES for their TV content. In Europe, satellite broadcasting, and especially direct-to-home (DTH), remains the leading distribution technology, with SES serving 167 million TV homes across the continent.

“Regardless of the shift in consumption habits, it is clear that our business remains an essential tool in delivering a high-quality viewing experience to the world’s leading broadcasters and content owners,” said Ferdinand Kayser, CEO of SES Video. “Through the differentiation of our services, we will continue to support their development and future success.”
Tweet