ZEE5 teams with Jio for KaiOS mobile integration | VOD | News | Rapid TV News
By continuing to use this site you consent to the use of cookies on your device as described in our privacy policy unless you have disabled them. You can change your cookie settings at any time but parts of our site will not function correctly without them. [Close]

A bespoke version of the ZEE5 app is now available on the Jio KaiOS feature phones in India, following a tie-up between the video-on-demand (VOD) platform and mobile operator Reliance Jio. 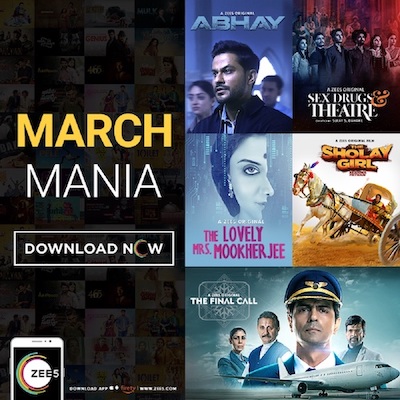 Jio KaiOS subscribers will also have access to music across genres, including film music from Hindi and regional movies, Indi-pop, categorised by mood and concert coverage. Popular movies are also available in Hindi, Bhojpuri, Marathi, Bengali, Tamil, Telugu and Malayalam.

“We at ZEE5 are focussed on bridging the digital entertainment divide between metros, semi-urban and rural markets. And, in this, we believe Jio is our perfect partner. With the rich repertoire of regionally relevant stories in the form of web shows, movies, docu-dramas, we are perfectly poised to be the content partner to Jio that has a robust presence in these markets,” said Tarun Katial, CEO, ZEE5 India.

“Through our library that houses music, TV shows, news and such, the audience will now have access to content on-the-go and at their convenience. ZEE5 is constantly looking at building value for its subscribers and advertisers alike, and with this partnership we are confident of filling a vacuum for brands who are seeking inroads into the regional audience’s mindspace.”

As of December 2018, ZEE5 has 56.3 million monthly active users, who spend an average of 31 minutes on the platform per day.According to Google Play store rankings, ZEE5 has consistently been among the top five free and grossing entertainment apps.

Nearly 370 million smart feature phones are expected to be sold across the world between 2019 and 20121, according to a recent report from Counterpoint Research . In India, Reliance Jio has acquired tens of millions of 2G feature phone users and transitioned them to its 4G network after after adopting the KaiOS platform.

Consumers have found the phone appealing because it cost a fraction of an entry-level smartphone but offered curated apps and robust functionality for social media apps such as Twitter, Facebook, and WhatsApp.
Tweet