Mobile viewers increasingly frustrated with video quality | Mobile | News | Rapid TV News
By continuing to use this site you consent to the use of cookies on your device as described in our privacy policy unless you have disabled them. You can change your cookie settings at any time but parts of our site will not function correctly without them. [Close]

Frustration with mobile streaming video is persistent and on the rise, according to the latest US audience research by Penthera. 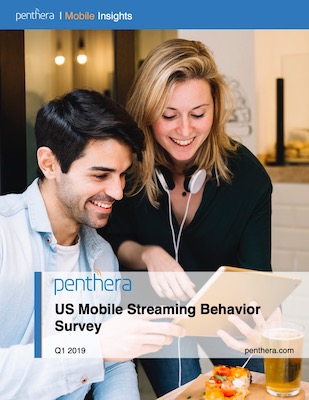 The US Mobile Streaming Behaviour Survey found that mobile video viewers still run into issues such as having videos not start, rebuffering in the middle of play and connectivity problems -- even as usage continues to surge worldwide.

As more and more OTT viewers cut the cord, they demand on-the-go options but are less tolerant of technological and experiential shortcomings than they were even a year ago, according to the study.

Frustrations have grown from 81% in 2018 to 88% in 2019. Even more noteworthy, the survey revealed that people are less tolerant of streaming frustrations in general, suggesting that as more providers enter the space, consumers have higher expectations for service. This year, 43% reported that they “accept” streaming can be frustrating, down from 50% last year.

The most common frustrating experiences were video re-buffering in the middle of playback (59%), video taking too long to start up (48%) and annoying advertisements (48%).

The US Mobile Streaming Behaviour Survey also found that 69% of those surveyed said that they stream video on their mobile devices at least weekly if not more often, compared to 52% in 2018; and 59% expect a streaming service to offer a download option, while two-thirds said they would be willing to pay a premium for the feature.

“Providers must take into account that connectivity is not a given for viewers. So the ability to watch video when connectivity is limited or non-existent isn’t a perk -- it’s mandatory,” said Penthera chief strategy officer Dan Hurwitz. “In fact, our survey shows it’s non-negotiable, and 59% of our respondents said they expect video providers to offer a download option. You’ll not only fail to win new customers, but you’ll lose existing ones if you don’t get this right. This represents an immediate opportunity for VSPs to step up, innovate to retain happy customers, find new ways to nurture their loyalty over time.”