IPTV boost as fibre networks spread across Europe | Infrastructure | News | Rapid TV News
By continuing to use this site you consent to the use of cookies on your device as described in our privacy policy unless you have disabled them. You can change your cookie settings at any time but parts of our site will not function correctly without them. [Close]

Market data released by the FTTH Council has showed that the demand for fibre networks in Europe is increasing with a 21% annual increase in the number of subscribers and a 36.4% increase in coverage. 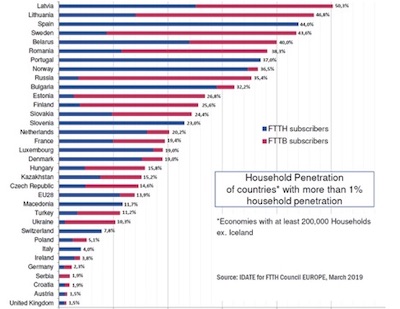 Other countries also experienced notable increases such as the Czech Republic with 523,950 new subscribers and Italy with 449,637. The latter territory saw whet the FTTH Council called ‘outstanding’ growth in the number of homes passed, from 4.398 million in September 2017 to 6.295 million in September 2018 for a total increase of 43.12%.

The FTTH Council added that it was notable that fibre technologies had evolved over the last few years. It said that by September 2018 it had observed a predominance of FTTH architecture over FTTB (56% vs 44%). It also saw that governments and local authorities were getting more involved in fibre projects, either directly, by signing agreements with telecom players, or via public funds.

“These new figures show a momentum that is accelerating over the last few years,” said president of the FTTH Council Ronan Kelly commenting on the report. “Full fibre is the way forward and the results of the Market Panorama provide compelling evidence of this. Fibre expansion is booming in many countries and today more consumers are aware of the benefits of fibre. Our job is not done, however, there is still a long way to go until every citizen and business has access to the benefits of full fibre in Europe.”