Disney+ service to be well-received | VOD | News | Rapid TV News
By continuing to use this site you consent to the use of cookies on your device as described in our privacy policy unless you have disabled them. You can change your cookie settings at any time but parts of our site will not function correctly without them. [Close]

Disney+ service to be well-received

Half of US adults will consider Disney's pending Disney+ direct-to-consumer (DTC) subscription video service, with a quarter moderately-to-highly likely to sign up according to new research from The Diffusion Group. 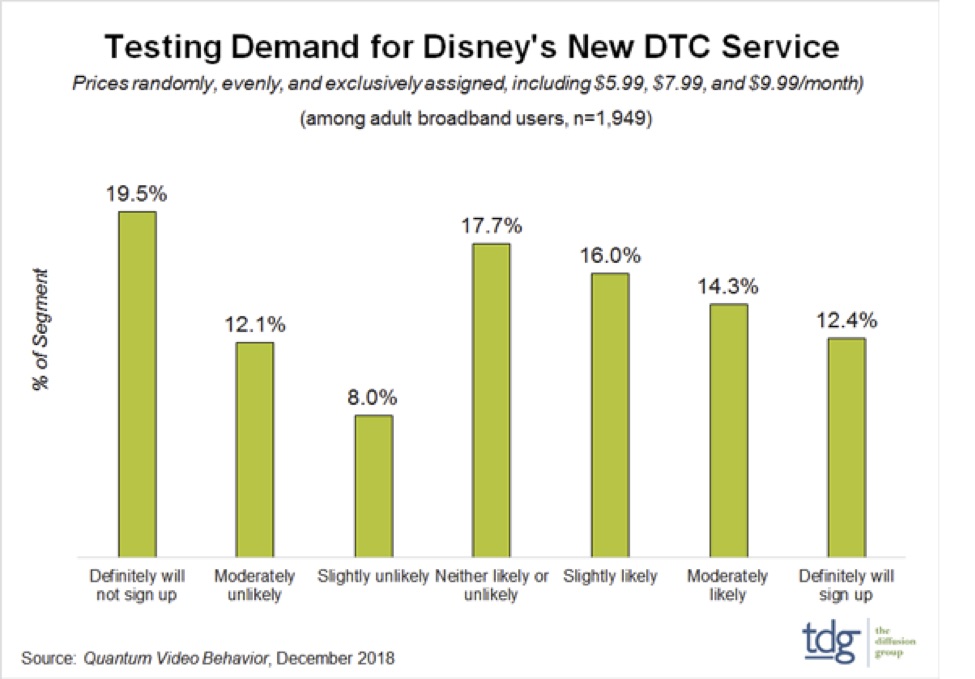 The research, part of TDG's eighth annual Video Behaviour in the Age of Quantum Video study, an annual survey of US connected consumers focused on multi-context, multi-device video viewing, found that Disney+ will likely to see solid interest -- assuming it comes to market at the right price.

TDG views the launch of Disney+ as a major test for the direct-to-consumer model, as it differs from both subscription aggregators like Netflix and streaming 'channels' like HBO Now.
In its survey, the analyst asked US adult broadband users regarding the likelihood they would sign up for ‘a Netflix-like service from Disney that included the Disney film library (titles from Disney, National Geographic, Pixar and Marvel, including Star Wars movies); the largest collection of Disney TV shows for children; and original shows and movies created exclusively for the service. Respondents were randomly assigned one of three price points for the service, either $5.99, $7.99, or $9.99 per month.

The study revealed that on average, 43% of adult broadband users are to various degrees likely to sign up, 27% moderately or highly likely to subscribe. In addition, while Disney+ appeals to a wide range of consumers, interest varies within several key segments.

“Based on our research, Disney+ will enjoy strong early demand,” noted TDG president Michael Greeson. “The amount of high-quality content being packed into the offering will make it not only appealing, but very sticky. This is a major studio pooling what is arguably the largest library of high-value content on the planet to populate a single branded subscription service.

“Notably, to further fortify the service, Disney is pulling select content from third-party SVOD providers like Netflix, suggesting a tribalism of sorts, with big-name studios reserving their best content for their own DTC services. As such, Disney+ will be under a microscope; a running case study of what DTC can be, and a real-time measure of what impact, if any, such tribalism may have on the value chain.”
Tweet