Prasar Bharati adds 11 state channels to DD Free Dish | Programming | News | Rapid TV News
By continuing to use this site you consent to the use of cookies on your device as described in our privacy policy unless you have disabled them. You can change your cookie settings at any time but parts of our site will not function correctly without them. [Close] 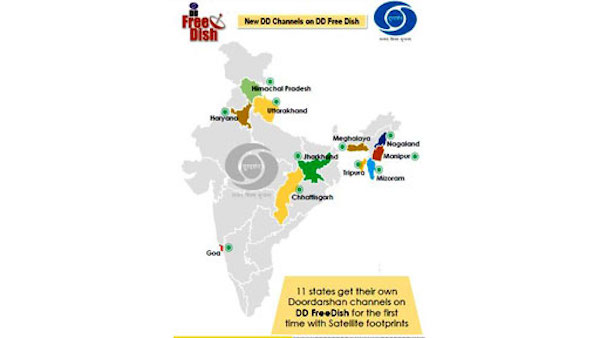 Prime Minister Narendra Modi welcomed the move in a tweet on Saturday (9 March).

“Glad to note that Prasar Bharati has brought 11 more state DD channels on the satellite footprint of India through DD Free Dish. This includes five channels for Northeastern states. This will go a long way in strengthening regional cultures and fulfilling people’s aspirations,” he said.

In a separate tweet, Modi added: “Congratulations to the people of Chhattisgarh, Goa, Haryana, Himachal Pradesh, Jharkhand, Manipur, Meghalaya, Mizoram, Nagaland, Tripura, and Uttarakhand for getting their own Doordarshan channels on DD Free Dish for the first time!”.

A statement from the Ministry of Information and Broadcasting (MIB) said the state channels “represent the regional aspirations of the local population”.

“Providing a satellite network for these channels through DD Free Dish will not only increase visibility of these channels in the regions, but also give them an all-India presence,” added MIB. “The increased accessibility to regional broadcast will help promote regional culture and give opportunities to local talent as well," the statement added.

The move follows the launch in February by the Prime Minister of the 24 hour Doordharshan satellite channel for Arunachal Pradesh, DD Arunprabha.Modi also laid the foundation stone of a permanent campus of the Film and Television Institute of India (FTII) in the state; the first of its kind in North East India.