More people are watching OTT in the living room | OTT | News | Rapid TV News
By continuing to use this site you consent to the use of cookies on your device as described in our privacy policy unless you have disabled them. You can change your cookie settings at any time but parts of our site will not function correctly without them. [Close]

More people are watching OTT in the living room

Parks Associates research has found that OTT video services have transitioned back into the home's living room, with a majority (52%) of U.S. broadband households now watching online video on a TV that is connected to the internet. 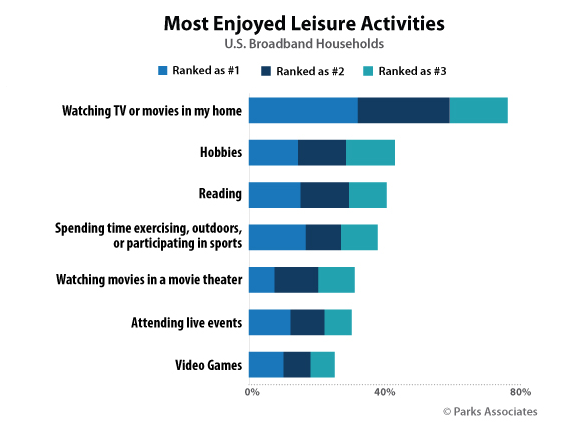 Its report, 360 View: Digital Media and Connected Consumers, also found that watching TV or films at home is the most popular leisure activity among US broadband households, with 55% selecting this among their top two favourite leisure activities.

"While the total number of hours consuming videos has declined, consumers are watching more internet video on the largest screen available," said Billy Nayden, research analyst, Parks Associates. "The number of hours consumers report watching video on a TV increased for the first time since 2014, with connected devices enabling internet video services on TV and shifting consumers away from PC and mobile viewing. As OTT competition becomes a battle for the living room, the challenge for device makers and content producers is finding the correct product mix to maximise both profit and utility."

The report also found that subscriptions are the dominant business model for OTT services. As more services emerge, many stakeholders fear an impending subscription overload in US households.

"As consumers' taste for OTT experimentation wanes, they will start to resist the push to add another monthly subscription to their households," Nayden said. "Many providers are starting to lead with freemium and ad-based models, in anticipation of this pushback."

Parks Associates also found that 19% of consumers subscribe to either Netflix, Hulu, or Amazon Prime Video and another OTT service, compared to 13% in 2017; and overall, consumers watched 25.7 hours of video per week in 2018, down from 29.5 hours per week in 2016.
Tweet