MWC 2019: streaming in mix as KT preps for world’s-first mass 5G network | Mobile | News | Rapid TV News
By continuing to use this site you consent to the use of cookies on your device as described in our privacy policy unless you have disabled them. You can change your cookie settings at any time but parts of our site will not function correctly without them. [Close]

South Korea's largest telecommunications company KT Corporation has revealed that it is preparing for the world's first full-scale commercialisation of 5G in March 2019. 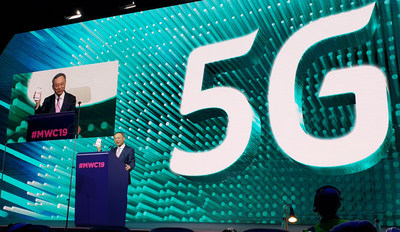 Calling the move an acceleration of its technology leadership, the company demonstrated at Mobile World Congress 2019 a range of 5G technology and services from artificial intelligence robots and rescue systems to streaming video.

KT showcased the world's first 5G trial services at the PyeongChang Winter Olympic Games in February 2018 and subsequently its plan for the trial services, such as 360-degree virtual reality (VR) live steaming, was later approved by the International Telecommunication Union (ITU) as an international standard.

During a keynote speech at MWC, KT Chairman and CEO Hwang Chang-Gyu said that the new 5G era will transform the world and also elevate user experiences to a new level of maximum versatility and immersion. “In the 5G era, neckband cameras, AR glasses and all kinds of devices will be connected to 5G, contributing to a better life for mankind.”

As it develops its 5G infrastructure, KT is actively seeking to expand collaborations with innovative ICT companies around the world. Its 5G Open Lab, a collaborative testbed, has already attracted partners including Samsung Electronics, Hyundai Mobis, Posco, Intel, Ericsson and Nvidia. KT plans to forge 1,000 partnerships by 2020. It also has signed agreements with Cisco, Intel and Qualcomm to cooperate in preparing commercial 5G services.