MWC 2019: FCC talks up US 5G policy | Mobile | News | Rapid TV News
By continuing to use this site you consent to the use of cookies on your device as described in our privacy policy unless you have disabled them. You can change your cookie settings at any time but parts of our site will not function correctly without them. [Close]

US broadcast and telecoms regulators the Federal Communications Commission (FCC) is proclaiming its policies as significantly contributing to the development of the video-friendly 5G mobile protocol in the US. 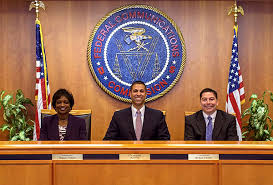 In an address at Mobile World Congress in Barcelona, Commissioner Brendan Carr asserted that big reforms 2018 were key to getting the ball rolling, including removing prohibitions on cell tower deployments in environmentally sensitive areas and for historic districts and buildings.

“First, we updated our approach to the federal historic and environmental rules that govern the build-out of broadband infrastructure,” he said. “We did so because our old rules assumed that every new cell site is a large, 200-foot tower. Those rules made no sense when you’re talking about the backpack-sized small cells that are needed to support 5G networks. They threatened to slow down and delay the deployment of next-generation networks. So we updated our environmental and historic preservation rules to reflect new technology.”

He also cited changes made to rules on local governments to help deploy the technology faster.

“We sought to respect the deep tradition of federalism in America, while providing updated guidance on the limits Congress placed on local governments’ small cell approval processes,” he said. “We clarified that the fees governments charge for siting small cells in rights-of-way must not exceed a reasonable approximation of their costs, and we tightened the shot clocks for approving small cell applications so that we can get this infrastructure up more quickly.”

He also mentioned that the FCC is committed to a 5G rollout beyond major cities.

“After all, many of the largest cities in the US, like those here in Europe, might see 5G almost regardless of the regulations we adopt,” he said. “But that’s not success. We want to see next-generation broadband and the economic opportunity it enables available in every community. And smart infrastructure policies are key to doing that—they can flip the business case for thousands of communities. That’s why we’ve been so focused over the last year at the FCC on updating our broadband infrastructure rules.”

5G will have a series of benefits to communities, he added, including on the jobs front.

“At the FCC, we have focused on spreading these opportunities to the maximum number of communities, under the mantra ‘More Broadband for More Americans,’” he said. “We hope to continue executing on that goal with a modern regulatory approach: one that is inclusive, nimble and attractive to investment and job creation.”