ITV Studios Global Entertainment unveils spring drama slate | Programming | News | Rapid TV News
By continuing to use this site you consent to the use of cookies on your device as described in our privacy policy unless you have disabled them. You can change your cookie settings at any time but parts of our site will not function correctly without them. [Close]

Basking in its recent success with such programming, ITV Studios Global Entertainment has lifted the lid off its new spring drama slate to international buyers at its second annual Drama Festival. 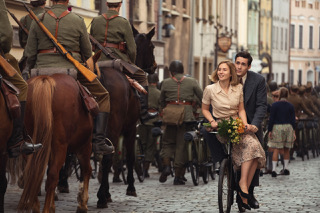 The range of programming features a range of new titles from ITV Studios’ production labels and leading independent producers, showcasing the most dramas soon to launch to the international market.

Headlining the slate is Mammoth’s Screen’s World on Fire (7 x 60’), a multi-stranded drama for BBC One which tells the story of World War Two through the lives of ordinary people from all sides of the global conflict. The drama was written by multi award-winning Peter Bowker and stars Helen Hunt, Sean Bean and Lesley Manville alongside rising stars Jonah Hauer-King, Julia Brown and Zofia Wichlacz.

Also from Mammoth Screen is the adaptation of Malorie Blackman’s best-selling novel series Noughts + Crosses (6 x 60’). Set in a dangerous alternate world, it tells the story of Sephy, a member of the black ruling class and Callum, a member of the white underclass who are divided by their colour but united by a forbidden love and burning injustice. Noughts + Crosses stars Helen Baxendale (Cold Feet, Cuckoo), Paterson Joseph (Timeless, Peep Show), Jack Rowan (Peaky Blinders, Born to Kill) and newcomer Masali Baduza. It is executive produced by Participant Media and Roc Nation for BBC One.

Other programmes include Wild Bill starring Rob Lowe (West Wing, Parks and Recreation) stars as a high-flying US police chief Bill Hixon, who is tasked with shaking up the Lincolnshire Police Force. The 6 x 60’ show is from 42, Anonymous Content and Shiver for ITV. Also included is contemporary drama A Confession (6 x 60’) from Oscar-nominated screenwriter Jeff Pope (Stan & Ollie, Philomena, Little Boy Blue); crime story The Bay (6 x 60’) from Tall Story Pictures for ITV and written by the award-winning Daragh Carville (Being Human, The Smoke); Brassic (6 x 60’), described as an edgy, bold and authentic comedy which follows a group of working-class friends who find unconventional ways to win at life.

“Our 2019 Spring drama slate is stronger than we could have ever imagined,” said Ruth Berry, managing director of ITV Studios Global Entertainment. “It is bursting with world-class drama; each one I am pleased to say we have backed all the way from its inception.”