Legendary exec Grindon lands at Vobile | Major Businesses | Business
By continuing to use this site you consent to the use of cookies on your device as described in our privacy policy unless you have disabled them. You can change your cookie settings at any time but parts of our site will not function correctly without them. [Close] 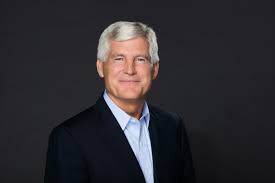 Grindon has signed on with Vobile to build partnerships for supplying long-form content for the company’s transaction VOD (TVOD) offering.

The exec’s entertainment expertise includes four years building and running Legendary Television’s Worldwide Television Distribution business for four years, up until February of last year. Prior to that, he spent 15 years as head of Sony Pictures Television International , where he managed international television channels, international television production and the distribution of all of Sony Pictures Entertainment's feature films and TV programming to TV, mobile and digital delivery outside the US, growing that business to over $2 billion in revenue.

“We’re delighted to work with a global distribution leader of Michael’s calibre to accelerate long-form film and television content aggregation for our burgeoning VOD business,” said Vobile founder and CEO Yangbin Wang. “As the industry leader in securing and measuring content for Hollywood’s top studios over many years, Vobile sits in a unique position to serve voracious consumer demand for streamed content in a no-risk, revenue share model that levels the VOD playing field for content owners, and online and mobile video distributors.”

Grindon added, “In a streaming video market defined by huge content acquisition costs for platforms, and high brand and IP risk for content owners, Yangbin and the Vobile team have hit on a winning formula at an exciting and formative time in the mobile video landscape. Vobile’s early commercial results have been very promising and I’m excited to help take this platform to new levels through the development of new and expanded partnerships with leading home entertainment providers.”