SVOD viewing to surpass traditional TV by 2023 | VOD | News | Rapid TV News
By continuing to use this site you consent to the use of cookies on your device as described in our privacy policy unless you have disabled them. You can change your cookie settings at any time but parts of our site will not function correctly without them. [Close]

Subscription video-on-demand uptake is accelerating sharply and in terms of hours viewing per day it will draw level with broadcast TV globally in 2023 says a report from Rethink Technology Research. 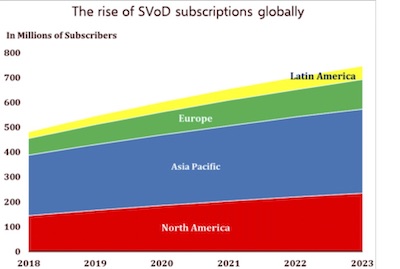 In its assessment of the rise and rise of the VOD market, the analyst stresses that it is not just a case of Netflix and the other SVOD giants everywhere. It observes that despite its well reported decline, transactional video-on-demand (TVOD) persists if only as a Netflix differentiator from, than for any serious businesses reason. Moreover, it notes that advertising-based video-on-demand (AVOD) is in abundance in emerging markets especially in China and India, where many people only have the potential to buy advertising-based products, it being the only currency to pay for fresh original content in those regions.

Whilst acknowledging that any qualitative calculations regarding Netflix are difficult given the company’s general reticence in releasing audience data, Rethink believes that at present the SVOD leader has taken an hour a day per UA home from advertising a rise over the past two years from 30 minutes. It adds if Amazon, Hulu and a number of vMVPDs and some specialist live services each take an hour, pretty soon well over half of that advertising viewing time is gone.

Rethink sees the 478 million SVOD subscribers that it has tracked down in 2018 growing into 743 million by 2023, based on these services being watched for just 30 minutes longer each year. This is not an outcome given the investment that is going on in original content. Moreover, it believes that it is highly likely that other factors will accelerate this process, making the situation worse for traditional advertisers.

Going forward, the report states that Rethink expects the next five years at least to see a major increase in advertising free SVOD services, a higher spend on original content, and there will exist fewer and fewer conventional advertising spots especially in North America and Europe.
Tweet