Netflix lands BAFTA firsts with Roma | VOD | News | Rapid TV News
By continuing to use this site you consent to the use of cookies on your device as described in our privacy policy unless you have disabled them. You can change your cookie settings at any time but parts of our site will not function correctly without them. [Close]

Subscription video-on-demand leader Netflix is celebrating its first success at the prestigious BAFTAs in the UK after Alfonso Cuarón won awards for best film, director, cinematography and film not in the English Language for its film Roma. 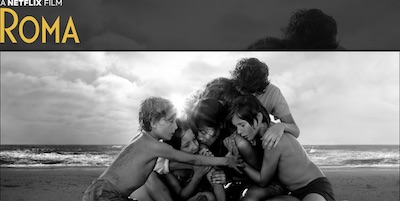 The British Academy of Film and Television Arts (BAFTA) is a world-leading independent arts charity that aims to bring the very best work in film, games and television to public attention and supports the growth of creative talent in the UK and internationally.

Described as the most personal project to date from the Academy Award-winning director and writer (Gravity, Children of Men, Y Tu Mama Tambien), Roma follows Cleo (Yalitza Aparicio), a young domestic worker for a family in the middle-class neighbourhood of Roma in Mexico City. Said to be delivering an artful love letter to the women who raised him, Cuarón draws on his own childhood to create portrait of domestic strife and social hierarchy amidst political turmoil of the 1970s.

Netflix film Roma is Cuarón’s first project since the ground-breaking Gravity in 2013.
Tweet