ZEE5 claims entertainment leadership thanks to #Sharethelove campaign | Ratings/Measurement | News | Rapid TV News
By continuing to use this site you consent to the use of cookies on your device as described in our privacy policy unless you have disabled them. You can change your cookie settings at any time but parts of our site will not function correctly without them. [Close]

Just a month after launching its campaign #Sharethelove for Pakistan, Sri Lanka and Bangladesh, Indian entertainment content provider ZEE5 is claiming market success for its niche in the two territories. 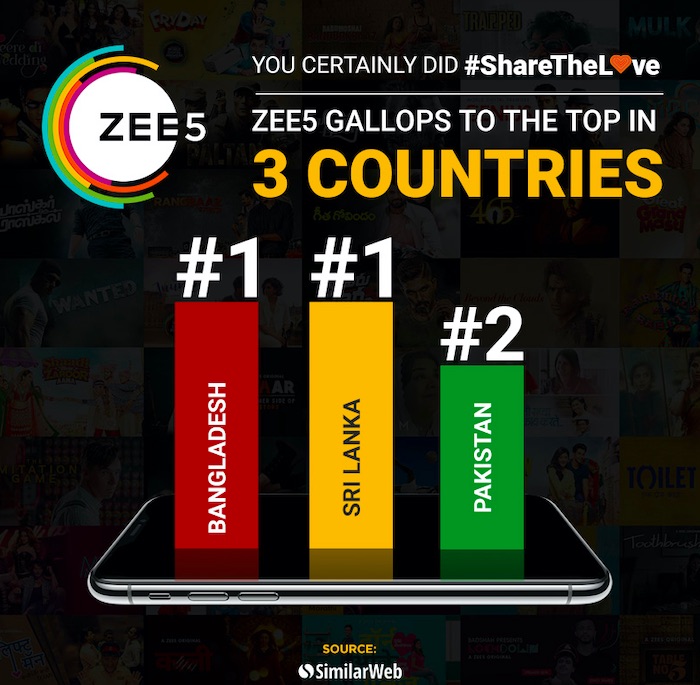 #ShareTheLove is themed around the similarities that ZEE5 says its home market shares with Pakistan and Bangladesh in terms of culture, food and entertainment. It says that it is bringing in a strong bouquet of content which it is confident will resonate with audiences in these markets.

According to data released by the content firm, #Sharethelove has propelled ZEE to become the fastest growing OTT platform across these markets, specifically the leading entertainment platform in both Bangladesh and Sri Lanka, and number two in Pakistan.

The success of the current campaign is such that ZEE5 CEO Amit Goenka says it will roll out #Sharethelove across the globe. “Bangladesh, Pakistan and Sri Lanka are high priority markets for us as we start our phased rollout globally, given the huge affinity for our content in these markets,” Goenka said. “Becoming the No.1. platform in these markets in such a short period of time is great news, and we’re extremely happy to see such a strong response for ZEE5 here.”

The ZEE5 App can be downloaded from Google Play Store or iOS App Store and can be accessed from www.ZEE5.com. ZEE5 is also available on Samsung smart TV, Apple TV Android TV and Amazon Fire TV.