TV advertising ‘at tipping point’ as ad industry declines | Ad Tech | News | Rapid TV News
By continuing to use this site you consent to the use of cookies on your device as described in our privacy policy unless you have disabled them. You can change your cookie settings at any time but parts of our site will not function correctly without them. [Close]

Research from independent media and marketing consultancy Ebiquity is warning of a significant decline in TV advertising over the next three years, projecting a 15% to 20% decline in TV ad viewing across adults. 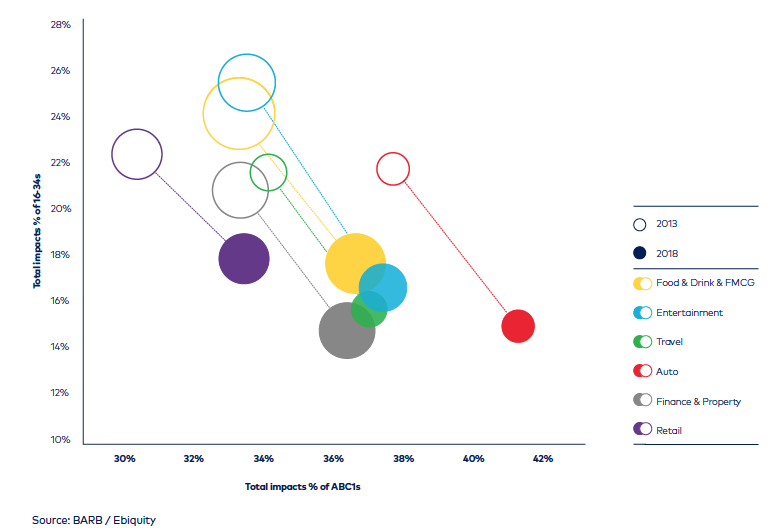 The TV at the Tipping Point report evaluated the key trends in linear TV and considered the associated implications for the future of TV advertising. The underlining finding of the research is that the market is soon approaching an inflection point.

Ebiquity’s analysis suggests that by 2022 there will be a 15% to 20% decline in TV ad viewing across adults, with even steeper declines of between 30% and 45% for the key audience demographic called ‘Housewives with Children’ and 16-34 year olds, respectively. These changes says Ebiquity will put pressure on ROI. In a world where linear TV audiences are shrinking, rising costs will threaten the ROI primacy of live linear TV within the next five years.

Furthermore, the analysis warns that the loss of younger viewers from linear TV is not limited to a few sectors. It notes that these trends are driven by changes in viewing habits, so it is unlikely that TV buyers will be able to mitigate against the change in the marketplace, and that a greater share of affluent consumers is a comfort to advertisers, but it will not be enough to offset the loss of young viewers in the long run.

On a more general point, Ebiquity believes that the greatest threat to TV as an advertising medium is the loss of two things: mass appeal, and the ability to reach most of the population quickly. In a call to action on the report's findings, Ebiquity urges the UK TV industry to do more to advance a transparent and unified audience measurement framework, which will allow advertisers to plan for these changes.

“Netflix, Amazon Prime and other streaming services are changing TV, with far reaching implications for advertisers and broadcasters,” remarked Ebiquity chief strategy officer Christian Polman. “Our evidence suggests that as of today no other single media line is ready to ‘take the crown’ from broadcast TV, however advertisers should continue to review the evidence and adjust their marketing strategy when necessary.”