Cord-cutting accelerates in the US | OTT | News | Rapid TV News
By continuing to use this site you consent to the use of cookies on your device as described in our privacy policy unless you have disabled them. You can change your cookie settings at any time but parts of our site will not function correctly without them. [Close]

Cord-cutting accelerates in the US

Netflix spent $13 billion on content in 2018, Amazon spent $5 billion, and Hulu gave subscribers access to $30 billion worth of content: these investments are starting to pay off with research showing that a surge in cord-cutting is well and truly underway. 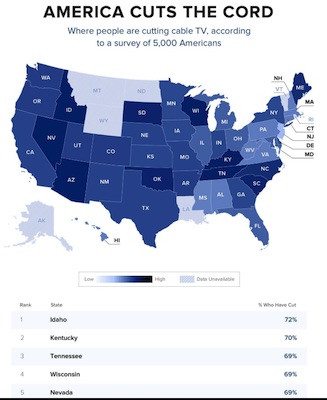 A survey of 5000 Americans by the Waterstone Group’s has indicated that 59% of Americans have cut the cord, while another 29% are thinking about it. That leaves just 12% of Americans who are committed to staying with their traditional cable packages.

As part of the survey, Waterstone also looked at state-level data, to see which parts of America are most aligned with the cord-cutting trend. The percentage of cord-cutters is highest in Idaho (72%) and lowest in New Jersey (just 36%).

It’s clear that an epic battle could be shaping between cable TV companies and streaming services like Netflix, Hulu, and Amazon; traditional players will have to find new differentiation to keep their bases.
Tweet