2019 to see SVOD, D2C ‘casualties’ | Media Analysis | Business | News | Rapid TV News
By continuing to use this site you consent to the use of cookies on your device as described in our privacy policy unless you have disabled them. You can change your cookie settings at any time but parts of our site will not function correctly without them. [Close]

Even though it forecasts that there will likely not be any slowing down of the rapid pace in the industry, failing SVOD and D2C services are probable during the year and some high value productions will fail warns the 3Vision annual trends survey. 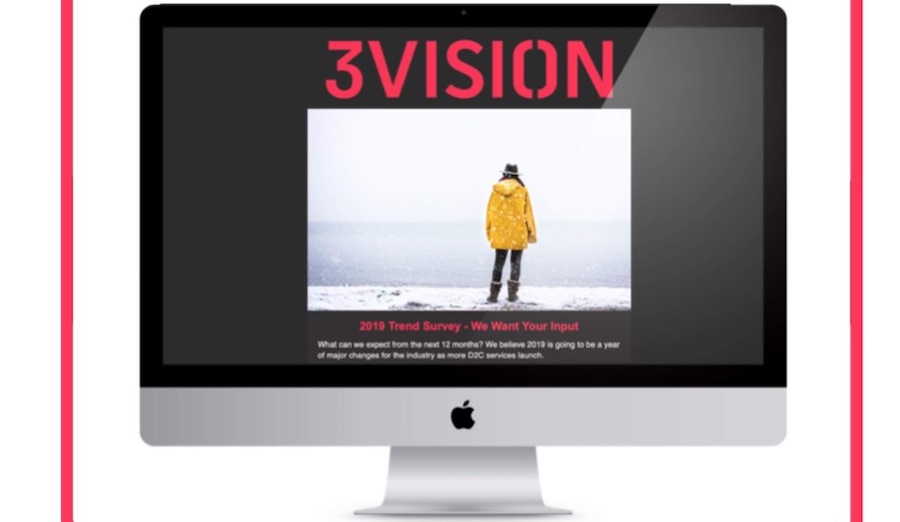 The importance of SVOD to pay-TV subscribers was the leading operator feature set importance issue for respondents with 86% believing that pay-TV operators should be focused on integrating with SVOD players, up 15 percentage points on a yearly basis, followed by TV everywhere (78%). The next most important issue, home gateway/multi-room, multiscreen capability registered with 39% of respondents. Despite the heavy marketing of such things, just 8% respondents rated the importance of 4K (perhaps reflecting the lack of content), and new innovations such as voice control and virtual reality were right down on 5% and 2% respectively.

Nearly three fifths (57%) believe that there will be growth in the virtual pay-TV market in 2019 and unlike last year respondents feel growth will not be limited to the US and the opportunity is global. 3Vision predicts that 2019 may see growth of standalone full virtual pay-TV in global markets - with challenges securing rights and feature sets (especially with free TV), but channels may start to view them in a more favourable light as they look for growth.

The research also found that as advertising revenues have shifted online and stagnated for linear television, commercial broadcasters are taking a bigger view of advertising video revenues - enhancing their AVOD platforms to compete for their share of all video advertising for online and TV.

The survey’s respondents believe that there are multiple drivers for broadcasters who are looking to find AVOD revenue growth. However, it was the content proposition that led, with exclusive content (30%), followed by content premieres (20%) coming out on top as AVOD’s key drivers.

Looking at the global TV hotspots for the coming year, survey respondents ranked Asia as the leading market for growth in 2019, repeating its top spot in 2018. Europe was the only other region with a year-on-year increase. Yet by contrast, the outlook for the African market looked less positive than in 2018 perhaps, said 3Vision, reflecting discontent following the closure of the Kwesé’s DTH platform and the lack of any major competition in the anglophone market for DStv. It added that the Middle East continues for all to be a market that is challenged by geo-political issues.

The survey concludes with the prediction that it is inevitable that 2019 will see casualties in the form of failing SVOD and DTC services are probable, and some high value productions will fail and scare off some new players. Yet owever respondents have been broadly positive about 2019, with no predictions of doom, and there are plenty of upcoming service launches, innovations and new programming to keep us busy.