SVOD services cement their place in UK TV ecosystem | Media Analysis | Business | News | Rapid TV News
By continuing to use this site you consent to the use of cookies on your device as described in our privacy policy unless you have disabled them. You can change your cookie settings at any time but parts of our site will not function correctly without them. [Close]

The annual report from UK TV measurement firm BARB has shown that while the Beast From The East did not chill TV viewing and England’s World Cup progress gave a kick to traditional TV, subscription VOD had a triumphant 2018. 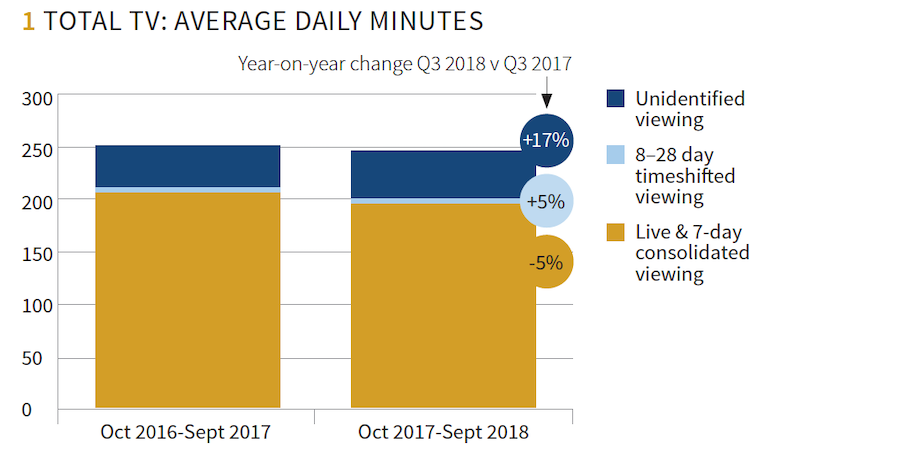 The report — based on BARB’s Establishment Survey, a continuous survey of 53,000 household interviews every year — set out to provide an update on the number of UK households that subscribe to at least one of Netflix, Amazon Prime Video or NOW TV, and the number of those with two or more services. In addition, it examined the type of households that are likely to subscribe to an SVOD service, based on household size, the age of any children that live in the home and social grade.

Fundamentally BARB found an increasingly fragmented media landscape while far from being a new concept, showed that growing competition for viewers’ time is increasingly evident. In the 12 months to September 2018, BARB found that time spent on unidentified viewing — where the TV set was being used to do something other than watch a BARB-reported channel or on-demand service, and for which SVOD services account for a large proportion — increased to 19% of all TV set activity, up from 16% in the preceding 12 months. In minute terms, that is a rise from 40 to 46 minutes a day on average.

Looking at viewing across the 12 months on a week-by-week basis, BARB said that it can that certain events impacted on both the level of total TV set use and the level of unidentified viewing. Christmas, times of inclement weather such as the aforementioned winter storm and Easter all produced increases in both types of viewing.

Indeed BARB regards it as clear that when viewers have more free time over holidays or during periods of bad weather, they use their televisions more. Conversely, during the World Cup over the summer, unidentified viewing fell while total TV set viewing increased. Viewers set aside unidentified viewing sources, including SVOD services, in favour of watching the drama of England’s run to the semi-finals on BARB-reported channels.

Compared with the daily average, unidentified viewing is 21% higher on a Saturday and 23% higher on a Sunday, suggesting said BARB that the audiences are waiting for the weekend to binge-watch an SVOD box-set. The corresponding figures for total TV set viewing are 5% and 12%. BARB”s conclusion is that while the nation’s unidentified viewing does follow the same patterns as total TV set viewing, there are differences in the times at which people consume it, indicating a symbiotic rather than parasitic relationship.

Looking at drivers, BARB asked panellists how often they use paid-for videos services such as Netflix, Amazon or NOW TV. Of those who said they have not used such a service in the last year, their average level of unidentified viewing is around 40% lower than that of all adults. For those that said they had used an SVOD service in the past week, their average level of unidentified viewing is around 50% higher than that of all adults. While it said that could not conclude that SVOD services solely account for this correlation, BARB regarded it as clear that they do represent a large, if currently undefined, proportion of unidentified viewing.

Yet BARB stressed that while it was important to bear in mind that unidentified viewing is still just under a fifth of the time spent with the TV set, and not all unidentified viewing is to SVOD services; it also includes games playing on consoles and watching programming more than 28 days after broadcast. However, BARB regarded it as evident that SVOD services do account for a significant proportion of this viewing.