Multiscreen Index reveals first worldwide decline in TV service subscribers | Media Analysis | Business | News | Rapid TV News
By continuing to use this site you consent to the use of cookies on your device as described in our privacy policy unless you have disabled them. You can change your cookie settings at any time but parts of our site will not function correctly without them. [Close]

The total number of subscribers to the 100 leading TV services fell slightly by 0.11 million in the third quarter of 2018, down by 0.02%, the first worldwide quarterly contraction to date, with only 43 services reporting gains says the latest informitv Multiscreen Index. 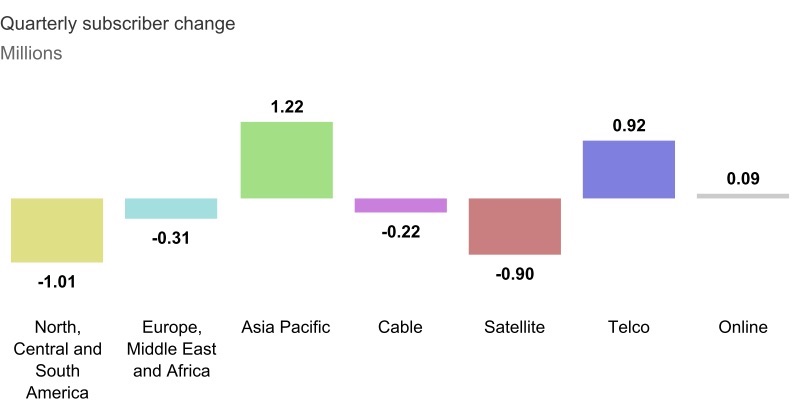 The research comprises 100 leading multichannel television and video services based in 38 countries that collectively account for around 430 million subscribing homes worldwide. The Q3 2018 version showed that while there was a decline of just over a million subscribers across North, Central and South America, the number of subscribers also fell for the first time in the Europe, Middle East and Africa region, by 310,000. By contrast, there was a gain of 1.22 million in Asia Pacific, led by an increase of 200,000 at Dish TV in India, which with a total of 23.50 million leads the world ranking in terms of subscriber numbers.

The top ten services in the United States lost 877,000 subscribers, but still have a total of 82.72 million between them, led by Comcast, with 20.98 million and DIRECTV with 19.63 million. Apart from the online services, AT&T U-verse was the only one to gain subscribers, with a modest increase of 13,000.

The greatest company gain was shown by Türk Telekom in Turkey, with a gain of 266,000 to a total of 3.53 million, including satellite, telco and Tivibu Go subscribers, up from 2.51 million a year previously. The quarterly largest loss was for Canal+ International, which fell by 608,000 subscribers following the football World Cup, taking its total to 6.93 million, although it was up 726,000 year on year. Even though Sky did not report subscriber numbers following its acquisition by Comcast, informitv said that the combination of Comcast and Sky has approaching 44 million residential television subscribers, making it the largest group in the Multiscreen Index.

“Our Multiscreen Index shows a slight fall in television subscriber numbers worldwide for the first time, following average quarterly growth of 1% over recent years,” editor William Cooper. “The third calendar quarter tends to be weaker. The key question is whether the next quarter will show a recovery or continuing decline.”