Pay-TV subs in Sub Saharan Africa to reach 46MN | Media Analysis | Business | News | Rapid TV News
By continuing to use this site you consent to the use of cookies on your device as described in our privacy policy unless you have disabled them. You can change your cookie settings at any time but parts of our site will not function correctly without them. [Close]

Pay-TV in Sub Saharan Africa is set to reach 45.63 million subscribers by 2024, an additional 16 million from the figure in 2018, according to a new report. 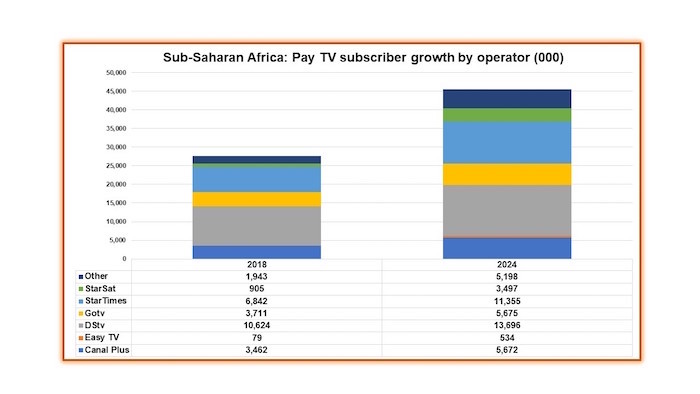 Digital TV Research found that the market in sub Saharan Africa was dominated by three media groups: South Africa’s MultiChoice, France’s Vivendi, and China’s StarTimes/StarSat together accounted for 93% of the region’s pay-TV subscribers last year. While remaining strong players, these operators’ share is predicted to fall to 89% by 2024.

“Subscriber numbers will climb by 61% over this period, but pay TV revenues will rise by only 42% - indicating lower ARPUs. Pay TV revenues will reach $7.72 billion by 2024, up by $2.3 billion on 2018,” said Simon Murray, principal analyst at Digital TV Research.

MultiChoice had gained a total of 14.34 million subscribers across its satellite TV platform DStv and digital terrestrial TV (DTT) platform GOtv by end if 2018. This total is set to grow by 5 million to 19.37 million by 2024, said Digital TV Research.

At the end of last year, Vivendi had attracted 4.01 million subscribers to its Canal+ satellite TV platform and Easy TV DTT platform; a figure predicted to climb to 6.21 million by 2024.