US TV market generates $4.11 billion M&A deal volume in Q4 2018 | Major Businesses | Business | News | Rapid TV News
By continuing to use this site you consent to the use of cookies on your device as described in our privacy policy unless you have disabled them. You can change your cookie settings at any time but parts of our site will not function correctly without them. [Close]

Research from Kagan has found that the US broadcast industry ended 2018 on a merger and acquisition high with M&A volume reaching $4.31 billion in the fourth quarter of 2018. 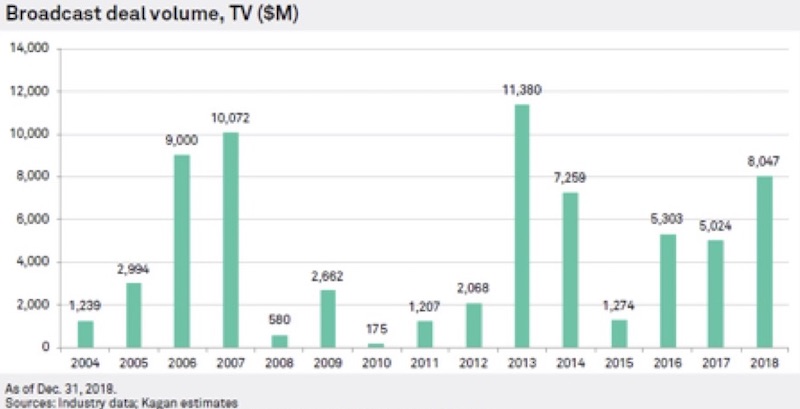 In total, 2018 closed with an $8.87 billion deal volume for US broadcast station M&A representing an increase of 8% compared with 2017. The analyst noted that in the largest deal of the quarter and year, Nexstar Media Group announced on 3 December that it would acquire all of Tribune Media’s assets for $46.50 per share. Kagan estimates the broadcast assets to be worth $3.51 billion. Ranking second in deal value for the year was the $3.44 billion merger of Gray Television and Raycom Media from the second quarter.

Other leading TV station M&A in the fourth quarter noted by Kagan included October’s sale by Cordillera Communications of all but one of its TV stations to E.W. Scripps Co. for $521.0 million. In addition to 15 main programming stations, the deal comes with eight low-power translators. On 9 November, Cordillera filed the sale of its last station to Quincy Media for $70.0 million.