4K/Ultra HD to surpass 100MN shipments by 2022 | 4K/UltraHD | News | Rapid TV News
By continuing to use this site you consent to the use of cookies on your device as described in our privacy policy unless you have disabled them. You can change your cookie settings at any time but parts of our site will not function correctly without them. [Close]

A tracking report from Futuresource Consulting has found that as 2018 draws to a close, consumer interest in 4K UHD continues to climb, receiving a further push due to average retail prices reaching parity with HDTV sets. 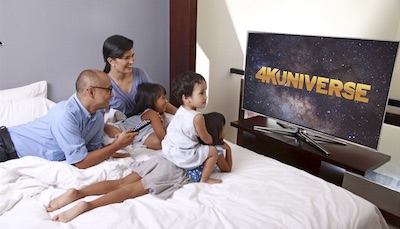 Regionally, Asia Pacific leads the way in 4K UHD volume, helped along by China, the largest single market for such sets. The data also showed that North America has also seen strong uptake of 4K UHD, with rapidly declining prices and a general preference for larger screens to match the larger-than-average homes in the region. In Europe, the positive picture continues, with Futuresource anticipating shipments to grow by 30% annually at the end of 2018.

Subscription video-on-demand (SVOD) was found to be the primary gateway for consumers to access UHD content with Netflix in particular driving UHD SVOD spend. The survey found that some 20–30% of subscribers have opted for the UHD premium tier. Broadcast Ultra HD has also enjoyed a strong 2018, with February’s Winter Olympics and the FIFA World Cup accelerating many broadcasters’ plans to introduce 4K UHD coverage, making high quality streams available. However, Futuresource cautioned that for wider uptake, a reduction in the cost to deliver UHD and HD broadcasts simultaneously is needed. It noted that IP delivery would be key to this, at least in the short to medium term.

“This year, we’re expecting annual 4K UHD TV shipments to power past 100 million units and the market will continue to grow with double-digit CAGR throughout our forecasting period to 2022,” remarked Futuresource Market Analyst Tristan Veale. “What’s more, high dynamic range – HDR – is beginning to make its presence felt and will be included in over half of all 4K UHD TVs sold worldwide in 2018, though consumer understanding remains limited.”

The data also found that Ultra HD Blu-ray content was progressing ahead of the expectations of many, with global consumer spend on track to reach $360 million this year. Futuresource observed that UHD Blu-ray has held onto its price premium and, as a result, consumer spend continues to outperform digital sell-through of UHD, despite the volumes being almost identical.
Tweet