5G networks to power volumetric display | Mobile | News | Rapid TV News
By continuing to use this site you consent to the use of cookies on your device as described in our privacy policy unless you have disabled them. You can change your cookie settings at any time but parts of our site will not function correctly without them. [Close]

As operators start to explore the potential of 5G’s ultra-high bandwidth networks with low latency and develop use case, Ericsson is proposing that volumetric display, also known as 3D-holographs, could well be an in-demand application that can only be carried over a 5G mobile network. 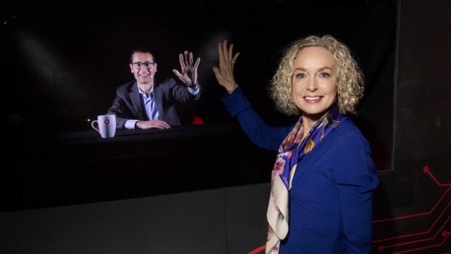 The communications technology and service provider believes that with its varied potential applications, including video and gaming, 3D holographic communication requires about four times as much data as a streamed 4K video. That means, said Ericsson, that only 5G has the speed and low enough latency to support this kind of application on a mobile network.

Ericsson and Vodafone Germany recently teamed up to power a live holographic interview combining 5G and connected transport. In the deo the telco’s CEO, Hannes Ametsreiter, appeared as a hologram in a moving, electrical minibus while actually being some 70 km away. The demonstration used Vodafone’s 5G test licence on 3.5 GHz spectrum and was supported by Ericsson’s 5G radio and Cloud Core solutions.

With fellow European operator, COSMOTE in Greece, Ericsson took the concept one step further and demonstrated a holographic music concert in which band members in different physical locations were ‘holoported’ on stage and were able to play together, in real time, as one band.

The demonstration used special cameras capable of capturing in-depth information to create a 3D representation of a live person. The latency needed for this kind of application is about is one-tenth of the current 4G technology. Ericsson provided the 5G trial system which operated on millimetre wave spectrum capable of reaching upwards of 8 Gbps.