Cord-cutting fails to cut through in Europe as pay-TV, SVOD rise | Media Analysis | Business
By continuing to use this site you consent to the use of cookies on your device as described in our privacy policy unless you have disabled them. You can change your cookie settings at any time but parts of our site will not function correctly without them. [Close]

Cord-cutting fails to cut through in Europe as pay-TV, SVOD rise

The 2018 edition of European Audiovisual Observatory Yearbook looking at comparative European data on film, TV, on-demand and physical video has found that unlike across the Atlantic, there is no evidence of mass dumping of TV services. 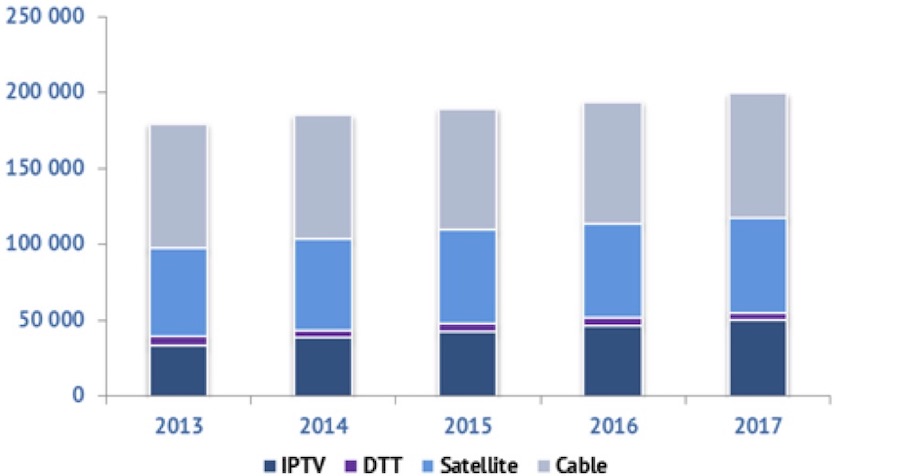 Main insights unveiled in the Yearbook which surveyed 41 countries were that the total number of households subscribing to pay-TV continues to increase with IPTV’s share of pay-TV subscribers up to 25%, yet with cable stagnating over the last five years, and satellite growth grinding to a halt.

Pay on-demand revenues in the region in the 2018 period grew on average by 45% per year between 2013 and 2017 and main was driver for growth was subscription VOD, with a 74% average annual growth rate. Subscription video-on-demand accounted for nearly three-quarters (72%) of revenues while transactional VOD retail was found to be growing faster than rental and accounts now for 42% of TVOD revenues.

Drilling deeper into revenue sources, US groups were found to have accounted for 72% of the top 50 audio-visual groups revenues, representing what the observatory called a massive leap, given that US groups’ share was only 66% in 2012. The top 50 audio-visual groups cumulated revenues grew at an annual rate of 10%, much higher than the market, due to permanent consolidation. Interestingly Netflix ranked fifteenth in the top 50.

Yet despite digital’s positive effect, the survey also found that television viewing was slowly decreasing, with viewing times declining on average, by 0.3% per year between 2012 and 2017.

Romania topped the European viewing charts with 5 hours and 46 minutes’ viewing. The sharpest declines were found in Denmark, Latvia, Norway and the United Kingdom as well as Iceland which has the shortest viewing time on 1 hour 41 minutes.

The yearbook concluded that it was more bad news for the physical video sector, falling in value 14% per year between 2013 and 2017. DVD sales were down 16% with Blu-ray down 7% in this period. Rental now accounts for 6% of the total market compared with 11% in 2013.