Bot network-driven connected TV advertising fraud spike revealed | Security | News | Rapid TV News
By continuing to use this site you consent to the use of cookies on your device as described in our privacy policy unless you have disabled them. You can change your cookie settings at any time but parts of our site will not function correctly without them. [Close]

As is always the case where there is a profit to be had, the current huge rise in ad dollars for connected TV has attracted a commensurate rise in fraud in the industry according to research from DoubleVerify. 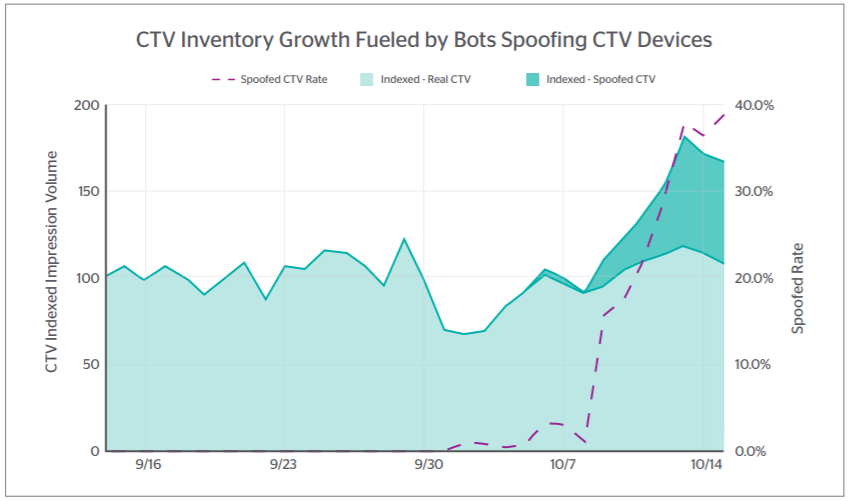 The digital media quality authentication firm calculates that connected TV adoption has exploded in 2018, with 183 million users, 56% of the US population, and as adoption rises, according to eMarketer data, US connected TV ad spend is projected to hit $8.2 billion. That would represent a rise of 75% over the last year.

Yet precisely because of this, the DoubleVerify Fraud Lab detected in October 2018 In, the Fraud Lab caught a 40% spike in connected TV inventory, driven by what it describes as a sophisticated new bot network.

To generate fraudulent impressions, the botnet spoofed real publisher URLs, sending false signals that tell the ad server that the impressions came from a connected TV device. DV also reviewed the types of OTT devices where this fraud was perpetrated and discovered that approximately one-third of impressions were made to look as though they originated from gaming consoles, with the remaining two-thirds from smart TVs.

DoubleVerify says that this type of fraud is something it has previously detected and protected against in desktop and mobile app environments, and now is able to address within the high-growth connected TV channel. It stressed that once it identified the fraud scheme, it took action to protect its global brand customers from potential fraud by extending quality coverage throughout the media transaction, both pre- and post-bid.

“The discovery is not surprising, given that fraud tends to follow the money,” said DoubleVerify CEO Wayne Gattinella, “With current data showing that approximately 50% of all Internet users access an online video subscription service or network TV app at least once a week, connected TV ad volumes and the opportunity for connected TV ad fraud have grown in line with user adoption.”

The full threat report is available from https://www.doubleverify.com/newsroom/falsifying-devices-new-fraud-scheme-targets-ctv/