4KHDR2018: Ultra HD enters ‘when’ and ‘how’, not ‘if’ phase | 4K/UltraHD | News | Rapid TV News
By continuing to use this site you consent to the use of cookies on your device as described in our privacy policy unless you have disabled them. You can change your cookie settings at any time but parts of our site will not function correctly without them. [Close]

Western Europe may be looking at a period of uncertainty over the near future but the region’s prospects for Ultra HD development looks as bright as an OLED TV screen. 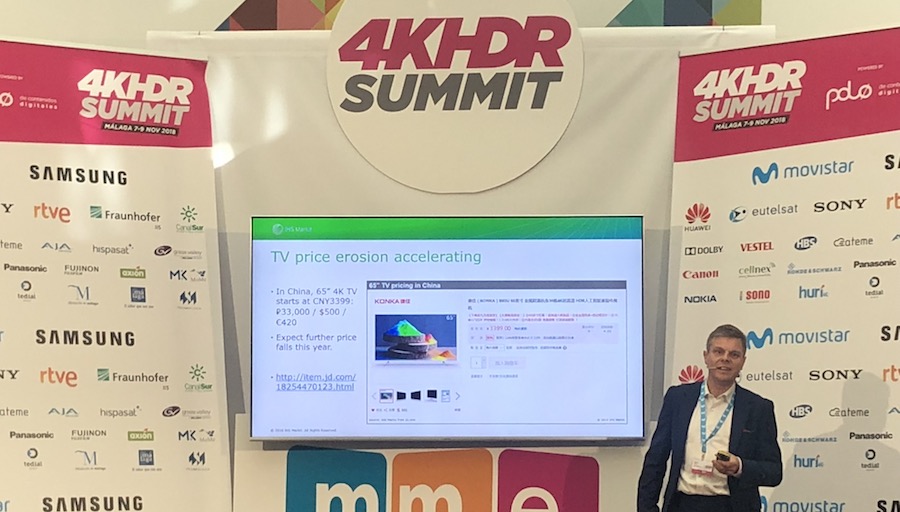 This was the conclusion of the fifth edition of the 4K[HDR]2018 conference, for the second time held in Málaga, pointing to a Western European market that is rapidly accepting the concept of ultra-high resolution, and actually defying the hype that has not only surrounded the industry but has actually hampered its growth.

Setting the scene on its opening day, Kagan senior analyst Mohammed Hamza told the audience that not only was the device ecosystem was growing fast but that ultimately the debate around the viability of 4KTV screens was no longer an issue but that the industry would plough its own path. He said:

“The consumer acceptance is there...The competitive environment has changed: development path for 4K is not the same as that of HD before it. Online platforms and streaming growth significant contribution. The key discussion centers on content, an issue that will persist as consumers and platforms transition.”

Interestingly, Hamza revealed that the number of new Ultra ND channels has slowed considerably over the course of 2018. He noted that while there were 60 new linear Ultra HD channels in 2017, just 10 new channels launched in the first half of 2018, driven by the FIFA World Cup. Europe generated much of growth with five new UHD channels. Aside from Europe and Asia-Pacific, Hamza also revealed that UHD linear channels in other regions were developing at a slower pace, with lower pay-TV adoption rates and technological implementations required to distribute and monetise UHD content.

Paul Grey, research and analysis director of IHS Markit also noted that West Europe was a 4KTV hotspot. He called this ‘quite an achievement,’ given the competition from the US and China and the sheer practicalities of installing a large Ultra HD set. Indeed, Grey added that in Europe people would have no compunction in moving furniture to get what they wanted. IHS Markit calculated that 17% of Western European households currently had UHD sets and that this figure would accelerate to 40% by 2022.

Looking at drivers for this growth, Grey noted 4K in Europe was moving fast into the mainstream, taken there by the like of Movistar whose consumers the analyst described as being ‘elite.’ Ultimately it was not a case of if, but how and when with Ultra HD. “Everyone is looking at it and now is a question of timing,” he added. “Requirements for successful are UHD: attractive hardware; reliable delivery; something worth watching. For content, there are wonderful dramas and live sport. 2022 could be the year of live and free-to-air in Europe. Maybe not terrestrial TV though.”

Yet in terms of potential gating factors, Grey warned that feature instability threatened to weaken the Ultra HD message. He felt that there was potential danger that consumers would buy 4KTVs on price alone and there were still issues regarding streaming content delivering, something he said was optimal for small audiences but was best effort only with no guarantees.
Tweet