OTT, connected TV advertising to undergo sea change of engagement | Ad Tech | News | Rapid TV News
By continuing to use this site you consent to the use of cookies on your device as described in our privacy policy unless you have disabled them. You can change your cookie settings at any time but parts of our site will not function correctly without them. [Close] 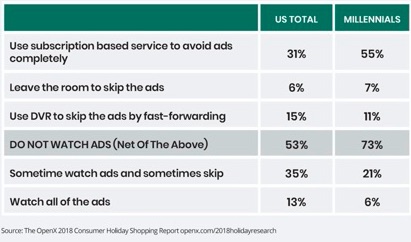 The company noted that already the providers are putting in place. their building blocks of the new TV landscape. It noted that newly announced Disney+ already has two new exclusive series from Star Wars and Marvel lined up; AT&T will also launch its new streaming service in 2019 and Fox News is officially set to launch its streaming service at the end of November.

With all this in mind it stressed advertisers have no choice but to adjust to the digital transformation TV is undergoing, fast. As shown in its Consumer Holiday Shopping Report for 2018, OpenX found that more than half of all consumers no longer watch commercials on live television.

In addition, a quarter of shoppers say they spend no time watching live TV at all, including 40% of millennials, 73% of whom don’t watch ads when viewing TV programming and who spend nearly five times more time on a mobile device than watching live TV. Almost a quarter have already cut the cord or never had cable, and another 13% are considering doing so within the next year.

“In 2019, as more eyes shift to data enabled TV viewing like OTT and CTV, advertising will undergo another sea change of engagement,” observed Dallas Lawrence, chief brand and communications officer at OpenX. “ To survive, advertisers must change the way they reach consumers and adopt an omnichannel strategy that does not rely too heavily on traditional linear television.