Asia-Pac pay-TV shrugs shift to IP and set to generate $56BN in 2018 | Pay-TV | News | Rapid TV News
By continuing to use this site you consent to the use of cookies on your device as described in our privacy policy unless you have disabled them. You can change your cookie settings at any time but parts of our site will not function correctly without them. [Close]

Despite the travails in other parts of the world, pay-TV is alive and kicking in Asia-Pac and the market is expected to show 5% annual growth over the current year says research from Media Partners Asia (MPA). 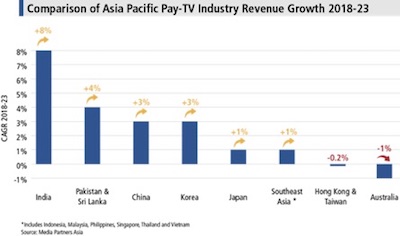 According to the Asia Pacific Pay-TV Distribution report, covers 17 markets across the region, pay-TV revenue in Asia Pacific, comprising of subscription fees and local and regional advertising sales, is set to top US$56 billion in 2018 after 5% annual growth. The market is then forecast to expand at a 3% CAGR between 2018-23 to generate $66 billion in revenue by 2023.

Driving the revenue increase is a healthy growing subscriber base. MPA analysis forecasts that pay-TV in Asia Pacific will grow by 3% in 2018 to reach 645 million subs, representing 57% of TV homes with at least one pay-TV service. This is then projected for a 2% CAGR between 2018-23 to reach around 696 million subs by the end of this period. Yet MPA points out that by 2023, regional pay-TV penetration 2023 will fall to 55% of TV homes when adjusted for multiple subscriptions, largely due to an acceleration in cable cord-cutting in China.

Commenting on the findings from the Asia Pacific Pay-TV Distribution report, MPA executive director Vivek Couto said: “Pay-TV stakeholders are adjusting to new realities as the industry shifts to IP-based distribution. The growth of high-speed broadband and online video is driving fundamental changes in content consumption and investment across key markets. This, together with piracy, will continue to adversely impact pay-TV industry growth. There will be more fixed broadband subs than pay-TV subs across much of Asia Pacific by 2021, while the gap between the mobile broadband subs base and pay-TV and fixed broadband subs will further widen as mobile networks emerge as a major means for mass content distribution, accelerating the shift in content consumption from households to individuals.”

The report also found that M&A activity for the Asia Pacific broadcasting and pay-TV sectors for 2017 and the first half of 2018 reached US$10.5 billion in aggregate, with the biggest deals taking place in Australia, India and Korea. MPA believes that more M&A and consolidation is likely in these markets with Southeast Asia likely to join the action over 2019-20.