Europe cable homes reach highest level since 2009 | Cable | News | Rapid TV News
By continuing to use this site you consent to the use of cookies on your device as described in our privacy policy unless you have disabled them. You can change your cookie settings at any time but parts of our site will not function correctly without them. [Close]

Research from IHS Markit has revealed a renaissance for the cable industry with the number of cable homes in Europe showing resilience and growing rapidly year-on-year in 2017, reaching 69.2 million and comprising 36.3% of all television households. 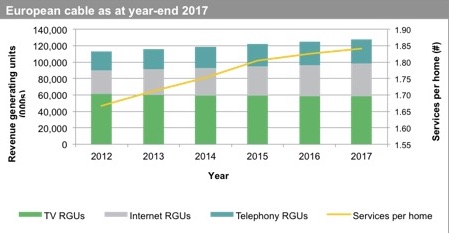 According to the analyst’s European Broadband Cable Yearbook This was the largest number of cable homes in Europe since 2009, when the figure stood at 70 million. In addition, the survey showed that the 2017 total marked the second consecutive year of growth in cable homes following a period of stagnation since the previous high.

Annual total cable revenue has followed in its steady growth path which begun in 2010, reaching €25.9 billion in 2017, representing a rise of 2% compared with 2016. In terms of revenue growth, internet was the best-performing cable category, with revenue rising 4% to €9 billion in 2017.

The research also showed that the number of total revenue generating units (RGUs) rose 2% year-on-year to 127.5 million, largely driven by an increase in internet subscriptions. At the end of 2017, cable customers in Europe subscribed to an average of 1.8 services. TV services accounted for just under half (46%) of cable TV revenue in 2017, followed by internet with 35% and telephony with 19%. Yet the total number of cable TV service subscribers in Europe in 2017 remained flat at 58.9 million.

The study also highlighted where cable operators also made further enhancements to their services over the last year. For example, it noted that German companies launched advanced TV services, including the rollout of the Vodafone GigaTV service and the Tele Colombus introduction of AdvanceTV. Both services crucially incorporated 4KTV capabilities. IHS Markit believes that the use of Android TV for interactive TV services also became increasingly popular in Europe last year, as DNA in Finland and YouSee in Demark both launched Android TV products.

Looking at territories, the research revealed Germany has continued to occupy its position as the largest cable TV market in Europe, with 18.7 million subscribers, which was more than three times the number of unique subscribers in the next biggest markets of Romania, the UK and Poland.

The rate of digitisation of European cable TV homes was also found to have ground in 2017. As the digital switchover gathered momentum, the number of digital subscribers grew 13% compared with 2016. IHS Markit attributed a significant portion of this growth to Germany’s Unitymedia, which switched off its analogue TV signals in July 2017.
Tweet