Rapid TV News - Sports drive global live TV streaming to 54% YoY growth
By continuing to use this site you consent to the use of cookies on your device as described in our privacy policy unless you have disabled them. You can change your cookie settings at any time but parts of our site will not function correctly without them. [Close] 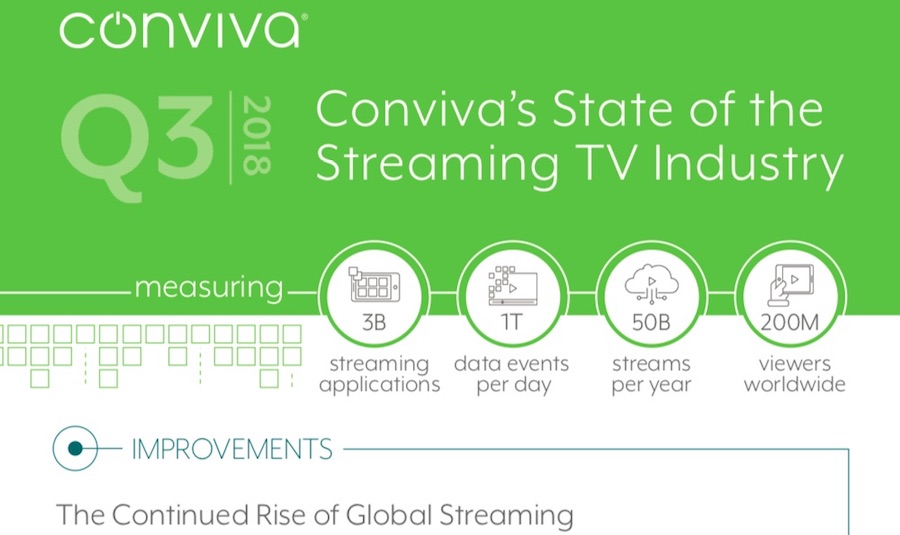 According to the State of the Streaming TV Industry Report for Q3 2018, viewers are increasingly demand a seamless streaming experience, and publishers are rising to the challenge to deliver higher overall quality of experience. It showed that there has been a 52% jump in plays and 63% growth in total viewing hours recorded year-over-year (YoY), including a major increase in traffic during the World Cup football tournament.

As viewers become more demanding, they were less tolerant of a poor experience, and were seen to be shifting shifting to platforms and devices that offer a better experience, trading PC viewing in favour of connected TVs and individual publisher apps for virtual multichannel video programming distributor (MVPDs) with bundled offerings. Virtual MVPDs are becoming more attractive, with 292% more plays and 212% more viewing hours YoY in the U.S., drawing significant share away from publisher apps by offering bundled content with better quality delivery, resulting in higher engagement.

The measurement shows that connected TVs now form more than 50% of global viewing and virtual MVPDs make up 75% of all US viewing. mobile growth has slowed in favour of connected TVs, which experienced a 145% growth in plays and a 103% growth in viewing hours.

The report also showed that live sports streaming has surged, as viewer confidence in streaming TV grows and providers deliver improved quality. NFL streaming in September alone accounted for roughly 3% of total streaming plays and viewing hours in the US, as more fans than ever elected to stream NFL games.

“Streaming TV consumption shows no signs of slowing down, and publishers have stepped up to the plate, delivering better quality and reliability that viewers have come to expect,” said Conviva CEO Bill Demas. “The demand for quality is pushing connected TVs to the top in terms of device share, commanding more than [half] of total viewing hours at the expense of PCs that have lost 7% while mobile remains relatively flat. It’s clear that viewers are less tolerant of a poor experience, as 13% of U.S. and 16% of global viewer attempts result in an exit before the video starts. Providers must increasingly focus on the streaming TV experience to match viewers’ rising standards.”

The full report is available at https://www.conviva.com/research/convivas-state-streaming-tv-industry/