Hulu, Netflix rises see US SVOD subs start to grow again | VOD | News | Rapid TV News
By continuing to use this site you consent to the use of cookies on your device as described in our privacy policy unless you have disabled them. You can change your cookie settings at any time but parts of our site will not function correctly without them. [Close]

While growth in subscription video-on-demand in Europe has remained healthy for some time, the US has now begun to see its own upturn in subs after a plateau according to the latest SVOD essentials report from Ampere Analysis. 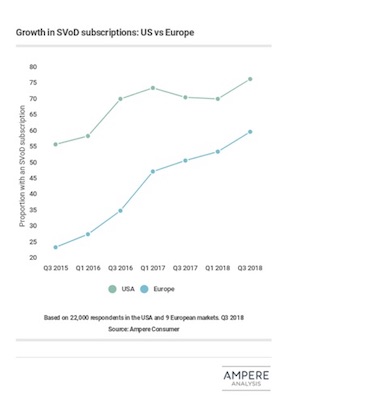 The new growth in the second quarter of 2018 has been driven by driven by increases in Hulu and Netflix subscribers across the country, and the Ampere data shows that penetration of SVOD services in the US is now approaching 80%.

By contrast, in Europe more than three-fifths of internet users in the UK, Denmark and Sweden have at least one SVOD subscription. France is the only country where fewer than half of all internet users have at least one SVOD subscription, yet the country has also seen strong Q2 growth in subscribers, up 10.6 percentage points compared with the previous quarter. This is the second highest growth after Poland which showed a quarter-on-quarter increase of 13.7 points.

Commenting on the research, Ampere Analysis senior analyst Toby Holleran said: “SVOD adoption reaching an all-time high in our consumer data suggests that a selection of new subscribers may have never previously paid for such a service. Crossing the threshold into paying for online video content can be quite the leap for consumers, and we expect new SVOD subscribers to take even more services as they seek to build their own content bundles.”
Tweet