MIPCOM: iQIYI, Nickelodeon embark on Deer Run S2 | Deals | News | Rapid TV News
By continuing to use this site you consent to the use of cookies on your device as described in our privacy policy unless you have disabled them. You can change your cookie settings at any time but parts of our site will not function correctly without them. [Close] 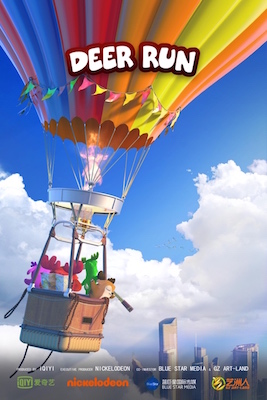 Under the memorandum of understanding (MOU), Viacom will provide creative guidance and supervision during the show’s production, and then distribute it on Nickelodeon’s international networks outside of China. Viacom International Media Networks (VIMN) will also explore Deer Run’s licensing potential opportunities internationally.

The 3D animation, aimed at preschool children, is about a group of deer and the challenges they face during their adventures.

The deal follows the two companies’ successful collaboration on the first season of Deer Run (working title), in an agreement reached in 2017. Currently in production, the first season is set to air in 2020.

“iQIYI is excited to be partnering again with VIMN for another season of Deer Run. The show’s engaging plot is both entertaining and educational and we predict great things for this IP going forward,” said Wang Xiaohui, chief content officer at iQIYI.

“iQIYI is committed to producing outstanding original content and we will continue to work with talented partners to bring the best content to our users.”

Nina Hahn, senior vice president of International Production & Development at Nickelodeon added: “Deer Run, with its endearing and humorous storylines and compelling, relatable characters, proves that great original animation content can come from any part of the world”.

The announcement comes at a time of rapid growth in China’s animation industry, the value of which exceeded RMB 100 billion in 2016, the companies said.