MIPCOM 2018: BBC signs multi-year natural history deal with Tencent | Deals | News | Rapid TV News
By continuing to use this site you consent to the use of cookies on your device as described in our privacy policy unless you have disabled them. You can change your cookie settings at any time but parts of our site will not function correctly without them. [Close] 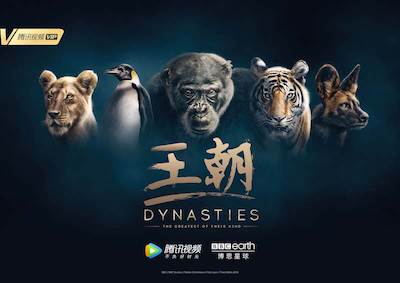 Presented by Sir David Attenbourough, BBC Studios’ Natural History Unit’s new five part series will broadcast simultaneously with the UK transmission in China on Tencent’s v.qq.com platform. Filmed over four years around the globe, Dynasties explores the lives of some of the world’s most iconic animals.

BBC Earth Tribe on Tencent , which is now live, will become the destination for over 650 hours of BBC Studios’ natural history and documentary programmes. It will also connect fans to the BBC Studios’ Natural History Unit’s producers both through online Q&As and at events.

“Our audiences have a huge appetite for BBC Earth content so we are thrilled to partner with BBC Studios on this new initiative, bringing our customers unparalleled access to an incredible portfolio of high quality content and unique interactive experiences,” said Suman Wang, chief editor of Tencent Video & SVP of Tencent Penguin Pictures.

David Weiland, EVP Asia for BBC Studios said: “Chinese audiences’ appreciation for BBC’s premium natural history content has grown over the last two years. Blue Planet II delivered over 250 million views on Tencent, and Planet Earth II in 2016, got over 200 million views. We are very excited to extend our partnership with Tencent with the co-production of Dynasties, and work with them to build a community of like-minded natural history fans, bringing our content beyond the screens to them via BBC Earth Tribe.”

Dynasty is also co-produced by BBC America  and France Télévisions.