Programmatic digital advertising set to reach $69 billion by 2020 | Ad Tech | News | Rapid TV News
By continuing to use this site you consent to the use of cookies on your device as described in our privacy policy unless you have disabled them. You can change your cookie settings at any time but parts of our site will not function correctly without them. [Close]

In the US, spending on programmatic digital advertising will reach nearly $48 billion by year’s end, according to a forecast from eMarketer. 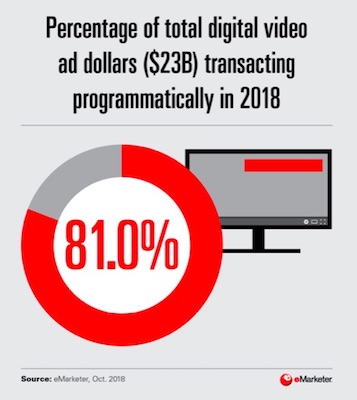 This form of automated buying and selling will see US advertisers transacting nearly $69 billion by 2020, accounting for 86.3% of the digital display pie. The numbers cover not only in-player video, but also out-stream, native and social in-feed video.

“Programmatic advertising—defined as the use of automation in the buying, selling or fulfillment of digital display advertising—is now the norm,” eMarketer said in its report.

It also found that in 2020, two-thirds of programmatic ad dollars will go to mobile, not desktop ads.

That said, anticipated gains in over-the-top (OTT) and connected TV ad dollars flowing into programmatic over the next 24 months will keep mobile’s total share from skyrocketing.

For in-player video alone, 83.6% of all digital video ad dollars in the US, or $33.55 billion, will move via automated channels by 2020, according to eMarketer.

“There’s organic growth in programmatic penetration of video advertising, thanks to the accelerated growth of connected TV and OTT viewership,” it said.