Rethink: SVOD killing the cinema star | Media Analysis | Business | News | Rapid TV News
By continuing to use this site you consent to the use of cookies on your device as described in our privacy policy unless you have disabled them. You can change your cookie settings at any time but parts of our site will not function correctly without them. [Close]

The video arm of Rethink Technology Research is forecasting a $7 billion fall in the global box office for films during the next five years with the rise of subscription video-on-demand (SVOD) services a key driver. 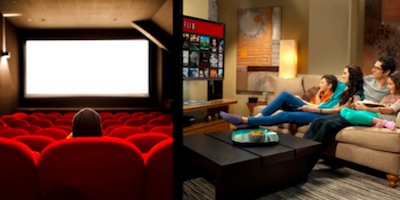 The analyst feels that cinema is consolidating across the US and Europe and that while the entertainment world throws itself and its considerable resources at the creation of original content, little thought has been given to what effect this will have on this most traditional distribution route to market for films. Yet it also notes that there is more content coming into the world through what it calls the ‘original’ content route, sold first and foremost over SVOD.

Moreover, it says that cinema is not so much falling in revenues as not gaining its fair share of inflation and population increase that should see global revenues rising by over 4% every year.

Citing a simple relationship between the spend on original content, Rethink calculates that for every $15 billion spent on pure SVOD/AVOD content, there will be a corresponding fall of a billion cinema visits. In addition, the report maps a future market where failure to jump on the SVOD market will create the conditions for some major established studios to stumble financially.

Accepting the premise that releasing multiple tens of billions of dollars into original content which only comes to market via SVOD, must disrupt the existing cinema supply chain, Rethink says that the question is just a matter of by when. It says that so far studios are forced to chase both cinema- and SVOD-based revenues and still appear to believe that both revenue streams are unrelated and will not affect one another.

Ultimately Rethink's report states that the rules became clear in 2016 when increasing spend on original content exacerbated what it called an ‘already nervous’ cinema market, and when visitors began to plummet. It notes that while box office has just about held up, for now, it is not clear what happens next.