MCN values ‘plummet’ as margin opportunity dwindles | Online Video | News | Rapid TV News
By continuing to use this site you consent to the use of cookies on your device as described in our privacy policy unless you have disabled them. You can change your cookie settings at any time but parts of our site will not function correctly without them. [Close]

Research from Ampere Analysis is warning that the good fortunes enjoyed by multi-channel networks (MCNs) may be changing and that YouTube per-view revenue could have peaked. 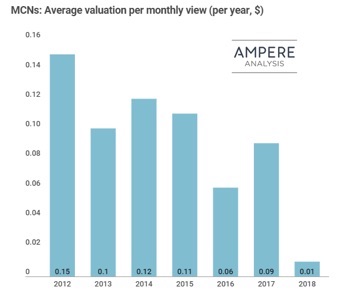 The analyst notes that just three years ago MCNs were being snapped up by traditional broadcasters for huge sums — in some cases nine-figure deals that were 25–30 times net revenue — but its latest data suggests that YouTube has reached a per-hour revenue ceiling in some markets, with its income generated by advertising from an hour viewed now equal to that of broadcast TV. Ampere believes this is a key factor influencing MCN’s waning growth and valuations.

In addition, Ampere now believes that rapid growing consumption of OTT media services is now no longer compensating for the inherent decline in the value of each view, with average valuation per monthly view plummeting to just $0.01 – a 10-fold decline since 2015. Ampere’s data suggests that this may be because certain OTT platforms are approaching a revenue ceiling in some territories and so the opportunities to monetise aren’t there.

Per hour of video delivered, according to Ampere, YouTube makes about $0.025 in revenue globally, but its US viewers are five times more valuable, meaning that in the USA it generates income at almost the same rate as broadcast TV. That is a billion hours of viewing per day generates $11 billion a year for YouTube by Ampere’s estimates; the same time nets the US broadcast TV market roughly $70 billion in ad revenue. However, it observed that YouTube monetises US viewers at five times the rate it monetises the average viewer, which brings its domestic per-hour-viewed revenue figure in line with the average for US broadcast and consequently - even with Google’s targeting and ad sales capabilities, Ampere believes it may be fast approaching the limits of its ability to grow per-stream revenue.

“As YouTube reaches parity per hour viewed with broadcast TV, MCNs valuations have plummeted,” commented Ampere Analysis director Richard Broughton. “The market has experienced a complete reversal from 2014 when MCNs were changing hands for vast sums on the promise of future profit. While growth rates in video consumption are still strong for multi-channel networks, eking out margins remains challenging. Bringing production further in-house and consolidating and combining networks to manage fixed costs are a few of the ways in which MCNs and their owners can reverse the recent trend.”
Tweet