Pay-TV, SVOD to add half a billion subs over next five years | Media Analysis | Business | News | Rapid TV News
By continuing to use this site you consent to the use of cookies on your device as described in our privacy policy unless you have disabled them. You can change your cookie settings at any time but parts of our site will not function correctly without them. [Close]

Pay-TV, SVOD to add half a billion subs over next five years

Global pay-TV and SVOD subscriptions are projected to reach 1.877 billion by 2023, up by 505 million on the total in 2017 according to a study from Digital TV Research. 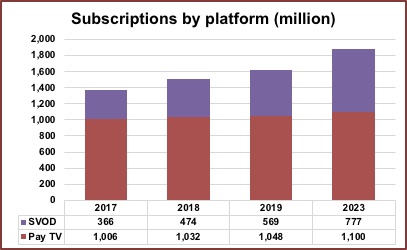