Voice control for entertainment devices set to surge | Infrastructure | News | Rapid TV News
By continuing to use this site you consent to the use of cookies on your device as described in our privacy policy unless you have disabled them. You can change your cookie settings at any time but parts of our site will not function correctly without them. [Close]

The penetration of smart speakers with voice assistants will reach 47% of US broadband households by 2022, with video devices with voice command accelerating as well. 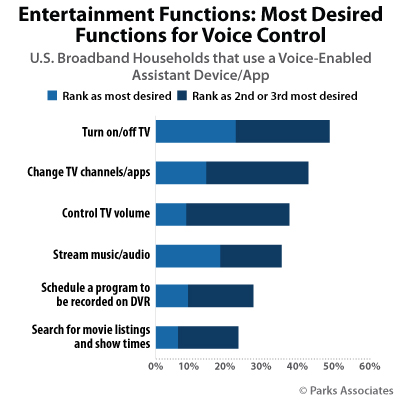 Parks Associates estimates that 55% of US broadband households find voice control of connected entertainment devices to be appealing, which is driving adoption and usage of voice control devices and apps.

US broadband households that use a voice-enabled assistant app or device are interested most in simple functions via voice—50% are interested in turning the TV on and off, while 37% are interested in controlling the volume. Parks Associates also found that 45% of households rated a unified interface as being important when making their next streaming media player or smart TV purchasing decision.

All of that said. current use of voice control for video is in its infancy—only 3% of U.S. broadband households report using voice commands when watching a movie or TV programme.

“Success will ultimately depend on voice being an effortless user experience that is superior to pushing a button,” said Brett Sappington, senior research director, Parks Associates. “If consumers have to think about it, they will quickly revert back to their original use patterns. Service providers are increasingly deploying voice control solutions to keep pace with consumer trends and retain ownership of the viewer experience. If deployed correctly, voice has the potential to increase engagement and impact subscriber churn.”