Hoichoi pledges library growth as it takes Bengali content to Bangladesh, UAE | Programming | News | Rapid TV News
By continuing to use this site you consent to the use of cookies on your device as described in our privacy policy unless you have disabled them. You can change your cookie settings at any time but parts of our site will not function correctly without them. [Close]

Bengali video streaming service hoichoi is undertaking a push on both original and acquired content, making an expansion into Bangladesh and the UAE. 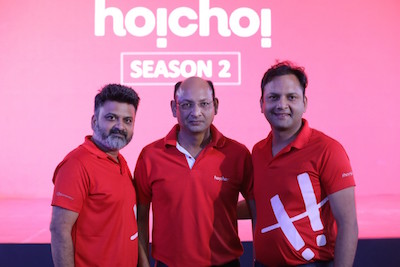 The year-old East Indian over-the-top (OTT) video says that it will add 30 original shows and 12 original films, as well as acquiring 200 Bengali movies in a bid to increase its library to 2800 hours of regional entertainment within the next year.

New originals will include the Q-directed paranormal drama Taranath Tantrik, an adaptation of the story by Bibhutibhushan Bandopadhyay, and thriller series Baishe Srabon – based on the popular film of the same name. Hoichoi’s first Bangladesh project is a road trip drama called Dhaka Metro, directed by Amitabh Reza Chaudhuri.

Backed by SVF, hoichoi has now teamed with Robi Telecom in Bangladesh, and Etisalat and du in the UAE to provide its content to a wider audience. In the UAE original shows will be dubbed in Arabic, as well as Hindi, Tamil and Telugu for the Indian diaspora based there. Together, the two new markets offer a potential of more than 180 million customers, the company said.

“We launched hoichoi with the objective of making it the ultimate destination for Bengali entertainment and we believe we have taken great strides on our way to achieving it. Almost all the shows are loved by the audience and has become the reason for pop-culture references! The fact that the average time spent in-app for hoichoi is 60 minutes per day per subscriber is extremely encouraging, which is way above the industry average,” said Vishnu Mohta, co-founder, hoichoi.

“We had also stated that hoichoi wants to cater to the 250 million plus Bengalis living worldwide and expanding our footprint into Bangladesh and Middle East is an important step in that direction.”

The company is also emulating the model adopted by mobile operators by introducing a hoichoi top up payment card, given 40% of its audience are based in rural areas.

“This offline payment mechanism is never heard of before in the OTT industry and will help us reach the masses in Tier II and Tier III cities. One can simply purchase the hoichoi top up cards available for subscribing to our three months, six months and 12 months plans from the nearest retailer and access the largest collection of the best in Bengali entertainment on hoichoi without having to do any online financial transaction,” said Mahendra Soni, director and co-founder, hoichoi.

A pay-per-view feature would also be added to the existing subscription video-on-demand (SVOD) model, with premium films streaming two weeks after their theatrical release and offered on an a-la-carte basis, the company said.

Hoichoi, which has now reached a million downloads in India, is powered by international content distribution platform ViewLift and Amazon Web Services.