Global OTT revenues to hit $129BN by 2023 | OTT | News | Rapid TV News
By continuing to use this site you consent to the use of cookies on your device as described in our privacy policy unless you have disabled them. You can change your cookie settings at any time but parts of our site will not function correctly without them. [Close]

The global OTT juggernaut is rolling on and over the next five years will be boosted by a spike in business across emerging markets, especially in China, according to Digital TV Research. 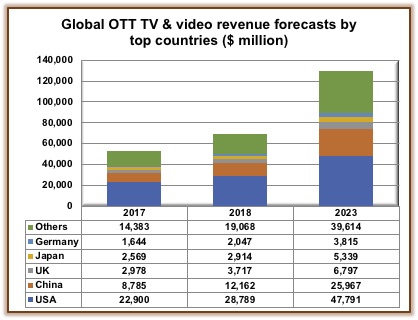 According to the Global OTT TV & Video Forecasts report which surveyed 138 countries, global online TV episode and films revenues will reach $129 billion in 2023, more than double the $53 billion recorded in 2017. About $16 billion is set to be added in 2018 alone.

By 2023, the leading five markets are projected to command 69% of worldwide revenues, down from 73% in 2017. This says the analyst shows just how quickly the emerging markets are taking a growing hold of business revealing that the rest of the world will grow at a faster rate. Indeed, Digital TV Research expects OTT revenues to exceed $1 billion in 17 countries by 2023, up from ten countries in 2017.

The currently burgeoning subscription video-on-demand arena shows no signs of slowing down and the analyst notes that after taking over the lion’s share of revenues in the sector in 2016, SVOD’s share of total business will increase to 53% in 2023, a six-percentage point growth in six years. This would mean that SVOD revenues would have rocketed climb by nearly $44 billion between 2017 and 2023 to reach $69 billion.

Despite losing market share to and being surpassed by SVOD, AVOD is still resilient says the research. Digital TV Research believes that there is still plenty of growth left in the AVOD sector. AVOD revenues are projected to increase by $27 billion between 2017 and 2023 to take its total to $47 billion. This would be 36% of total revenues.

In terms of regions, by 2023, the report states that the US will remain the dominant territory by some distance. However, its share of global revenues is forecast to fall from 43% in 2017 to 37% by 2023. Yet by this time revenues in the US will likely more than double between 2017 and 2023 – adding nearly $25 billion to reach $48 billion. China though will be the growth star. The Global OTT TV & Video Forecasts calculates that the country will add $17 billion to its total over the same period to nearly triple its revenues to $26 billion. China’s share of the world’s total will climb from 16% in 2017 to 20% in 2023.
Tweet