Western Europe OTT market to generate $23BN revenues by 2023 | OTT | News | Rapid TV News
By continuing to use this site you consent to the use of cookies on your device as described in our privacy policy unless you have disabled them. You can change your cookie settings at any time but parts of our site will not function correctly without them. [Close]

A study from Digital TV Research is predicting that over the next five years, Western European OTT TV episode and film revenues will more than double from the $9.84 billion recorded in 2017 and climb by $2.63 billion in 2018 alone. 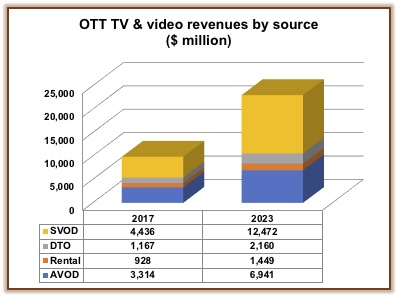 The Western Europe OTT TV & Video Forecasts report surveyed 18 countries and calculated that the total market value will reach $23.02 billion in 2023 driven by a sharp increase in subscription video-on-demand (SVOD) customers from 50.34 million at the end of 2017 to a likely total of 98.85 million by 2023.

The survey calculates that nearly 15 million subscribers will be added in 2018 alone, with 11 million more expected in 2019, and that by this time 69.3% of Western European TV households will have subscribed to an SVOD platform, up from 38.4% at end-2017. Norway is set to have the highest proportion at 104.8% by 2023. Germany, Italy, France and Spain will all fall below the regional average by 2023.

Not surprisingly, Netflix is set to remain the largest SVOD platform by some distance, with 49.75 million paying subscribers in 2023, half of the region’s total and the same as the 2017 proportion. The 2023 total includes 22 million Amazon Prime Video subscribers.

In terms of business generated, the UK is forecast to be largest OTT revenue earner in the region outstripping rival territories by a significant factor with its 2.98 billion generated 30% of the 2017 total. The UK’s $6.80 billion in 2023 will represent a similar proportion. SVOD became the region’s largest OTT revenue source in 2016 by overtaking advertising on-demand revenues. SVOD’s share of the total is forecast tto reach 54% by 2023, up from 45% in 2017.

SVOD absolute revenues are expected to almost triple by reaching $12.47 billion in 2023 – up from $4.44 billion in 2017. The Western Europe OTT TV & Video Forecasts report https://www.digitaltvresearch.com/products/product?id=213 also estimates that the UK will remain the SVOD revenue leader by some distance – generating as much as second-placed Germany and third-placed France combined by 2023.
Tweet