OTT, pay-TV and skinny packages co-exist, not either/or for consumers | Media Analysis | Business
By continuing to use this site you consent to the use of cookies on your device as described in our privacy policy unless you have disabled them. You can change your cookie settings at any time but parts of our site will not function correctly without them. [Close]

OTT, pay-TV and skinny packages co-exist, not either/or for consumers

US consumers are weighing their video options and testing the waters on several fronts, including OTT video, skinny TV and traditional cable subscriptions – often ending up with a mixture of all three. 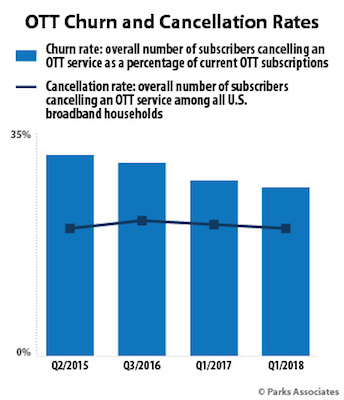 The uptake and churn rates across the video spectrum offer little consensus in terms of which are cannibalising the other’s revenue—but a review of recent analyses shows that service categories may be more complementary than adversarial.

For instance, Parks Associates research this week found that the rate of cancellation for OTT video services among US broadband households has held steady over the past three years at approximately 18%. The average subscription length for OTT video services is 30 months overall, although the three top services in the market—Netflix, Amazon and Hulu—have the most stability, while churn rates for other services tend to be more volatile.

“With OTT service penetration starting to plateau at around 65% adoption among U.S. broadband households, the OTT video market is reaching a level of saturation for the services currently available to consumers,” said Parks analyst Brett Sappington said. “In an increasingly crowded and competitive marketplace where subscriber acquisition costs are high, this plateau highlights the need for services to focus on retention rather than solely acquisition. Successful services can encourage retention in several ways, such as community building, continuously offering new and fresh content, and improving their user experience.”

While OTT has reached a saturation level, most US consumers are also still carrying a traditional pay-TV subscription. In fact, MRI’s Cord Evolution research found that 71% still have cable, satellite or telco TV service, with no plans to cut the cord – including 58% of those aged 18-to-34 and 69% of people ages 35 to 49. Pay-TV loyalty is highest, at 80%, of those 50 and over, unsurprisingly.

Most of these subscribers (55%) are “stacking” their services, and using OTT as a complement to their STB-delivered fare – a testament to the value of original content for services like Netflix and Hulu. That’s especially true for the advertiser-coveted 18-to-34 group, where 76% of them have multiple services.

“The fact is that pay-TV services still account for most of the TV watching that happens in the US,” said Amy Hunt, VP of TVideo Media Sales at MRI and author of the Cord Evolution research. “Many of their subscribers simply cannot imagine a new way of doing things. But as younger generations more comfortable with streaming technologies set up households, cable and satellite companies need to find ways to remain attractive and relevant.”

Meanwhile, the meet-in-the-middle option offered by skinny TV – streaming services that replicate the traditional live-TV experience offered by cable, satellite or IPTV with a more limited channel lineup and a lower price – is giving wings to traditional TV distributors.

According to the Q2 2018 US Multichannel Subscriber Report  by Kagan, combined cable, direct broadcast satellite (DBS) and telco multichannel sectors lost 860,640 video subscribers in the three-month period ended 30 June, ending the quarter at 92.2 million subscriptions (89.4 million of them residential customers). However, throwing skinny-TV services DIRECTV NOW and Sling TV (owned by Dish Network) into the mix reduces the quarterly subscription losses by approximately 45%, raising the residential figure to 93.5 million. The residential multichannel penetration rate stood at 75% as of June 30 when including the virtual services.