Social platforms dominate online video spend | Ad Tech | News | Rapid TV News
By continuing to use this site you consent to the use of cookies on your device as described in our privacy policy unless you have disabled them. You can change your cookie settings at any time but parts of our site will not function correctly without them. [Close]

Despite concerns over brand safety and ad fraud, advertiser expenditure on online video continues to grow rapidly thanks to a boom in mobile consumption and most of that spending is going on social platforms says a report from WARC. 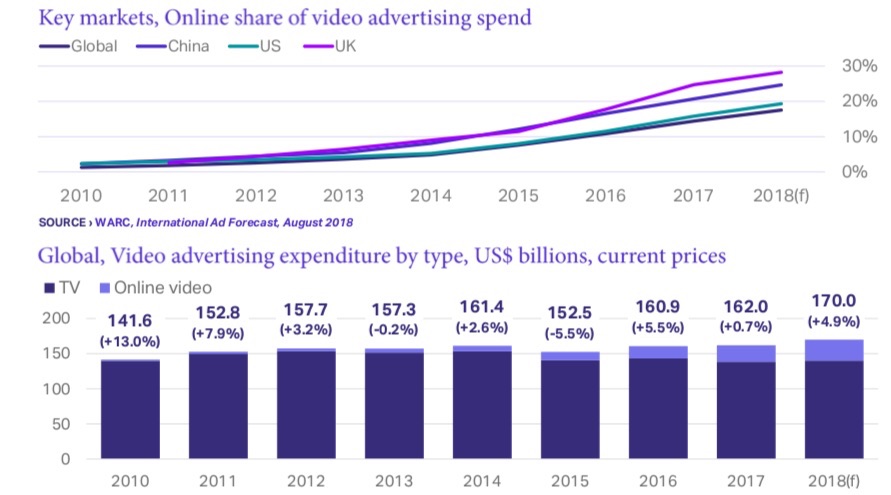 The advertising effectiveness insight provider’s latest monthly update on global ad trends report focuses on online video and says that expenditure on the medium — inclusive of pre/mid/post roll, social and broadcaster video-on-demand — is expected to rise 27.5% year-on-year to reach $29.8 billion at the end of 2018. This compares with just a 1.1% annual rise in linear TV advertising. Overall online video is projected to take a 17.5% share of the total video advertising market.

The study showed though that shares vary widely between markets, however. In the UK, online video is expected to account for 38.2% of all video ad-spend in 2018; in China the figure is 24.7% while in the US, the largest video market by far, the figure is 19.3%.

WARC calculates that over two-thirds 60% of daily online video viewing now on mobile devices and most of the money generated for this channel is going to mobile-optimised social platforms such as YouTube and Facebook, the report says. The report found that in the UK, of the £1.6 billion spent on online video advertising in 2017, 81.2% (£1.3 billion) was paid to social platforms. This compares with 55.4% in 2014.

“The vast and continuing increase in video consumption via mobile devices has directed ad dollars to social platforms, despite the well-documented and persistent risks around negative adjacency and ad fraud,” said WARC data editor James McDonald. “Facebook hopes to regain the initiative with its Watch platform, which is being positioned as a safe brand environment offering advanced audience segmentation."

The report also found that as influencers account for more than half of video views on Facebook, advertisers are increasingly turning to them to build brand equity and deliver their messaging aside approved content. Yet it also cautioned that for the second half of 2017, at least one in ten online video ads posed a risk of negative adjacency to brands.