China’s TV programming market now second only to the US | Media Analysis | Business
By continuing to use this site you consent to the use of cookies on your device as described in our privacy policy unless you have disabled them. You can change your cookie settings at any time but parts of our site will not function correctly without them. [Close]

China’s TV programming market now second only to the US

Research from IHS Markit has found that China has overtaken the UK in the TV programming industry, becoming the second-largest market in the world after the US. 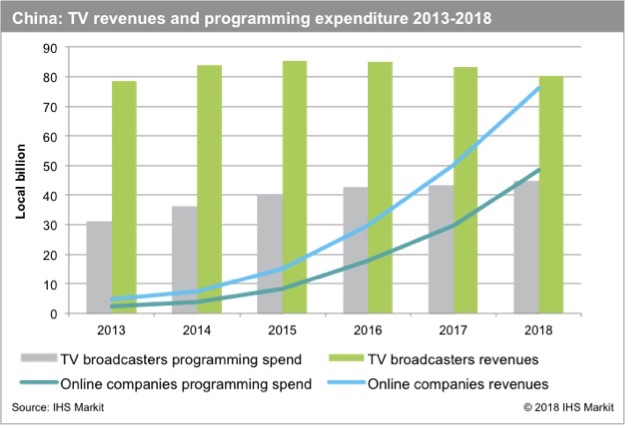 The growth in China’s TV programming spending was largely due to what the analyst said was ‘aggressive’ content investment by online companies Baidu, Alibaba and Tencent who have upped their spending on content origination and acquisition for their respective video platforms iQiyi, Youku Tudou and Tencent Video.

Looking at underling trends in monetisation for the territory, IHS Markit also discovered that broadcaster advertising revenue growth in China has plateaued since 2014, reaching 83 billion yuan (US$12.3 billion) in 2017, but online revenue is on the rise, driven by greater video advertising and subscription income.

The analyst said that for China, like in most other markets, as digital entertainment viewership gained traction, advertisers were gradually moving more of their budgets to digital platforms. It also expected online companies to overtake TV broadcaster spending in 2018, if the content creation spree persists.

“In addition, distribution of linear TV and online platform content can generate lucrative returns, in both domestic and foreign markets. While online platform companies are increasing China’s TV programming expenditure, they should be concerned by user retention and sustainability of content costs. In order to retain existing subscribers and attract new ones, online platform companies are investing heavily to create and acquire exclusive content. Unlike Netflix, these companies still rely substantially on advertising and sponsorship. If the cost of content continues to surge, such aggressive investment will become unsustainable.”