CBS Reality reveals return of original crime series for autumn | Programming | News | Rapid TV News
By continuing to use this site you consent to the use of cookies on your device as described in our privacy policy unless you have disabled them. You can change your cookie settings at any time but parts of our site will not function correctly without them. [Close] 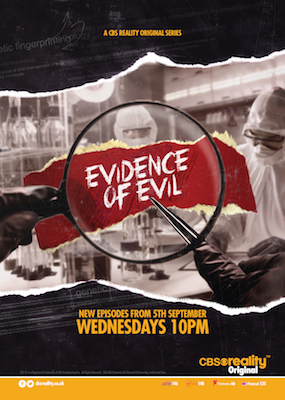 CBS Reality claims to be the biggest factual entertainment channel in the UK amongst adult women and a top-ten most-watched non-PSB channel amongst all adults. New episodes of Evidence of Evil are set to air on Wednesdays from 5 September and Written in Blood is due to premiere on CBS Reality at 10pm on Tuesday 16 October.

Evidence of Evil is produced by Peninsula Television. The series examines how advances in technology have revolutionised detective work, as seen through a number of high-profile cases. Each episode will comprise of key witness testimonies, interviews, reconstructions and archive footage. The cases featured in the new episodes include the murder of EastEnders actress Gemma McCluskie, Tracie Andrews A.K.A. ‘The Road Rage Killer,’ and the murder of Paul Gault in Northern Ireland.

Produced by and renewed said CBS Reality following the ratings success of the first season, Written in Blood will return with 6 x 60 new weekly episodes. It will once again be hosted by bestselling writer Simon Toyne, author of The Boy Who Saw and the Sanctus trilogy who will transport viewers on a journey of discovery as he meets six of the world’s most popular crime fiction writers to discuss the influence that true crime’s grim realities has had on their writing. Each episode will delve into a different criminal case using reconstruction and real life footage.

Commenting on the new commissions, Sam Rowden, director of programming, CBS Channels, and executive producer on both series said: “True crime is an intrinsic part of CBS Reality’s DNA. We're thrilled to have produced further episodes of Written in Blood and Evidence of Evil with our production partners, and to be giving our dedicated audience more authentic true crime from intriguing angles.”