OTT spend to propel global TV, video spend to $559BN by 2022 | Media Analysis | Business | News | Rapid TV News
By continuing to use this site you consent to the use of cookies on your device as described in our privacy policy unless you have disabled them. You can change your cookie settings at any time but parts of our site will not function correctly without them. [Close]

Research from Strategy Analytics has calculated that global consumer and advertising spend on TV and video will likely grow from $490 billion in 2017 to $559 billion in 2022, with over-the-top services contributing 90% of this growth. 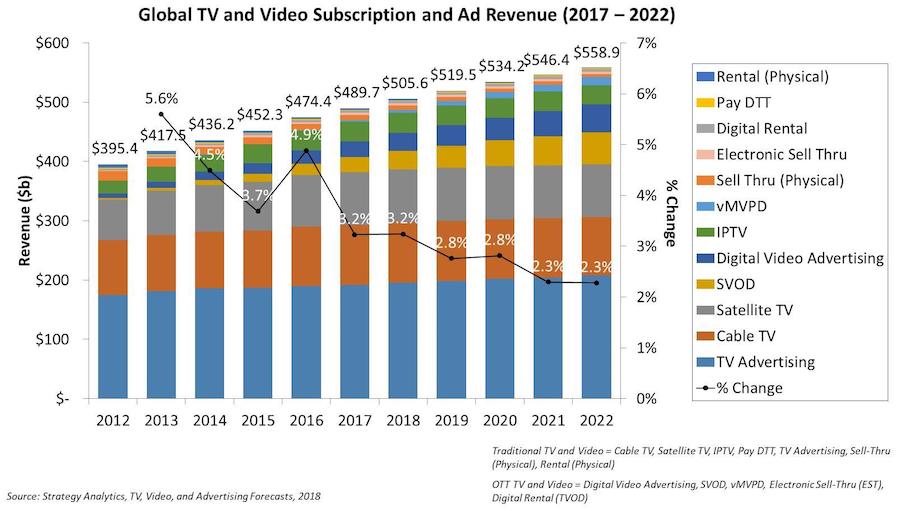 Furthermore, says the TV’s Transformation: A Unified TV and Video Market Perspective report, consumer spend and digital video ad revenue from OTT video services such as YouTube, Facebook, iTunes, Google Play, Netflix, Amazon Prime Video, Hulu, DirecTV Now, NOW TV, Maxdome, iflix, and other online video services will double over the forecast period, reaching $123 billion by 2022. By contrast though, at the same time global consumer and advertising spend on traditional TV and video products and services is projected to be over $435 billion, accounting for just over three-quarters of all TV and video revenue and just $7 billon up on the figure generated in 2017.

Regionally report also found that by 2022, North America will continue to be the largest TV and video market, the source of 38.7% of global consumer and advertising spend on TV and video. IPTV is set to buck the cord cutting trend in Western Europe where its providers are set to generate  €9.9 billion by 2022, a 15% increase from 2017. Strategy Analytics believes the rival technologies are all see revenues decline over the next five years, with the cable industry set for a net loss of €987 million by 2022, pay satellite (net loss of €187 million), and pay DTT (net loss of €125 million).

“OTT TV and video services will be the driving force behind future revenue,” according to Michael Goodman, director, television and media strategies at Strategy Analytics, commneting on the TV’s Transformation: A Unified TV and Video Market Perspective report. “However, traditional TV and video services should not despair too much, as they will continue to account for the majority of consumer and advertising spend for the foreseeable future.”