SVOD subscriptions set to accelerate in US | VOD | News | Rapid TV News
By continuing to use this site you consent to the use of cookies on your device as described in our privacy policy unless you have disabled them. You can change your cookie settings at any time but parts of our site will not function correctly without them. [Close]

SVOD subscriptions set to accelerate in US

The number of SVOD subscriptions in the US will climb to 208 million in 2023, up from 132 million in 2017, according to forecasting from Digital TV Research. 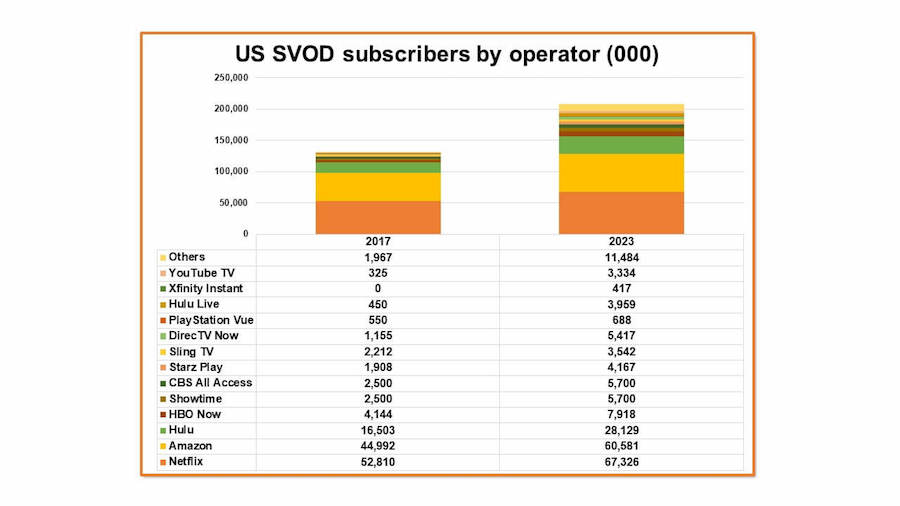 “Our SVOD subscriber forecasts are gross,” said Simon Murray, principal analyst. “Many homes pay for more than one  SVOD service. We believe that this proportion will rise as more platforms establish themselves.”

The North America OTT TV & Video Forecasts report estimates that 73.5% of TV households (88.5 million) will subscribe to at least one SVOD platform by 2023. The average SVOD household will pay for 2.35 SVOD platforms.

This compares to 55% of TV households (65.1 million) subscribing to at least one SVOD platform by end-2017; the average SVOD subscriber paid for 2.03 SVOD platforms by end-2017.