Facebook Marketplace IPTV pirate fined £50,000 | Security | News | Rapid TV News
By continuing to use this site you consent to the use of cookies on your device as described in our privacy policy unless you have disabled them. You can change your cookie settings at any time but parts of our site will not function correctly without them. [Close]

In the latest example of the law reaching into social media to protect content owners, a UK citizen has received a court order against him after being found to be selling IPTV subscriptions and pre-loaded illicit streaming devices on Facebook Marketplace. 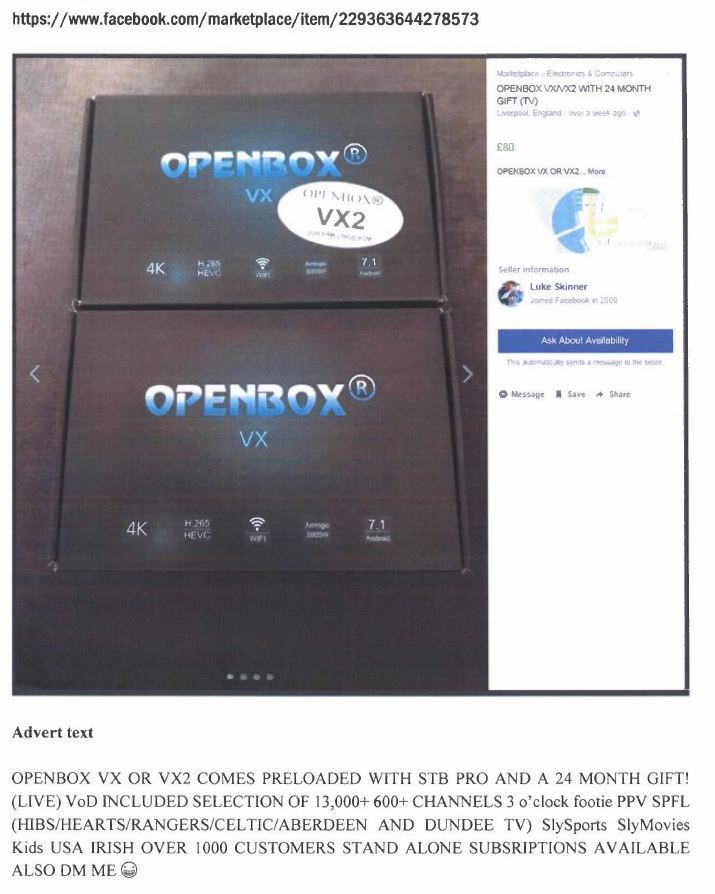 Luke Skinner of Fife, Scotland had courts orders passed against him in relation to his sale of IPTV subscriptions and pre-loaded set-top boxes via Facebook Marketplace that made Sky and other premium content available illegally. Skinner was selling subscriptions to illegal content for £35 per year and pre-loaded Openbox VX and VX2 boxes, with a 24-month subscription, for £70 or £85. His advertisements on Facebook Marketplace showed pictures of Sky channels and offered access to “Sly Sports” and “Sly Movies”.

In May 2017, Facebook banned users from selling any streaming device that facilitates or encourages access to digital media. After his activities were discovered, the Court of Session, Edinburgh issued an interdict, the Scottish equivalent of an injunction, against Skinner preventing him from selling or advertising illegal streaming devices and subscriptions. Skinner was also required to pay £50,000 in damages.

Commenting on the prosecution, Matthew Hibbert, head of litigation at Sky said: “Those who infringe copyrighted content do so at their own risk. This case is another example of the heavy price people who facilitate piracy can pay.” Added Colin Hulme, partner at legal firm: “Without question, subscription services and pre-loaded devices that give unauthorised access to copyrighted content are illegal. Sellers misspell brand names to avoid the safeguards that protect content from being pirated but this case proves that they can still be detected.”

The court actioin is just the lastest in a series of prosecutions and litigation against piracy. On 19 July 2018, an English court granted a High Court Order that will require the UK’s major internet service providers – principally Sky, BT, Virgin Media, TalkTalk, plusnet and EE – to block and disrupt servers that host illegal streams of the Premier League’s matches across the whole of the forthcoming football season.