Web video, P2P drive increase in global film and TV piracy | Security | News | Rapid TV News
By continuing to use this site you consent to the use of cookies on your device as described in our privacy policy unless you have disabled them. You can change your cookie settings at any time but parts of our site will not function correctly without them. [Close]

Research from conditional access and content security specialist Irdeto has found that consumers who prefer piracy over legal video sites are ensuring that peer-to-peer piracy continues to be the major method of accessing illegal copies of movies and TV shows. 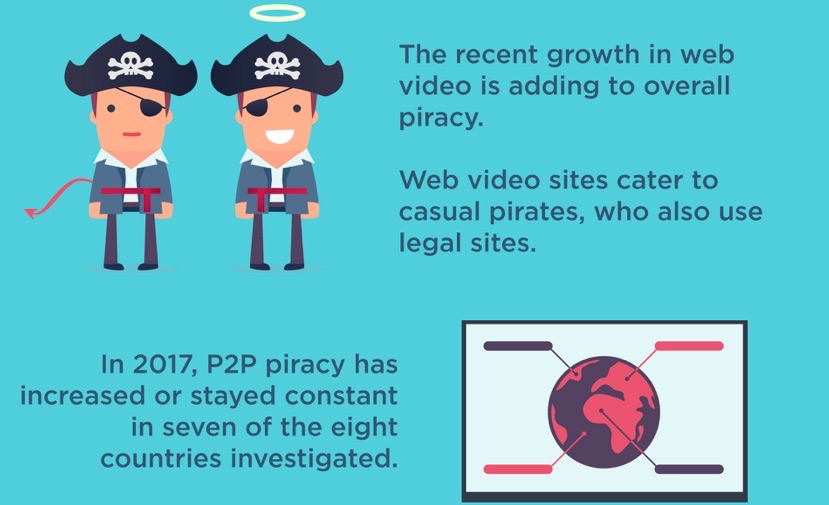 Irdeto found that that the growth in web video piracy is only adding to the global movie and TV piracy problem, rather than replacing P2P piracy and that the overall popularity of pirate web video sites is growing alongside P2P, driven by visits from so-called ‘casual’ pirates who go to both legitimate sites and illegal piracy sites.

The research also found that visits to P2P sites accounted for 70% of global activity for both web video and P2P platforms. This behaviour led to an average of 800 million global monthly downloads from P2P sites in 2017. In addition, P2P activity in the most prominent high-piracy countries, which include Russia, India, Brazil, the Netherlands and the US, is either constant or increasing. The research also revealed that web video sites source a significant proportion (28%) of their high-quality video content from P2P sites.

“While many expect P2P piracy to be taken over by streaming and direct downloads, it’s clear that this has not happened yet. P2P piracy is still a big threat to the industry, in which the overall piracy problem is growing,” said Peter Cossack, vice president, cybersecurity services, Irdeto. “While the increase in bandwidth and social media has facilitated growth in content redistribution piracy, particularly around live sporting events, it is clear that other forms of piracy are not going away any time soon. This must be considered by content owners and rights holders in their security strategies.”

The full research is available at https://resources.irdeto.com/white-papers-e-books-reports/the-piracy-landscape-has-web-video-replaced-peer-to-peer