ESPN+ becomes exclusive US home for Community Shield showdown | Programming | News | Rapid TV News
By continuing to use this site you consent to the use of cookies on your device as described in our privacy policy unless you have disabled them. You can change your cookie settings at any time but parts of our site will not function correctly without them. [Close]

The 2018 FA Community Shield, the annual football match between FA Cup and Premier League titleholders — this year Chelsea and Man City respectively — will be carried exclusively in the United States on the ESPN+ streaming network. 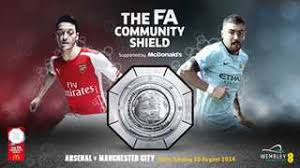 An FA Community Shield Preview show will be available on ESPN+ later, looking back at the campaigns of both clubs last season, and features a one-on-one interview with Chelsea’s new manager, Maurizio Sarri. On Monday, ESPN+ will feature a highlight show recapping Sunday’s match.

Chelsea and Manchester City have between them won five of the last seven Premier League titles. A year ago, Arsenal defeated Chelsea in the 2017 Community Shield game in a shootout following a 1-1 draw after 90 minutes. Both teams have each won the shield four times and the winner on Sunday will become the sixth club to win the competition at least five times.

ESPN+ has consistently won with premier football content in the states, including World Cup coverage.